Amazing how the Lizard People don't want gold to cross the SMA(50): 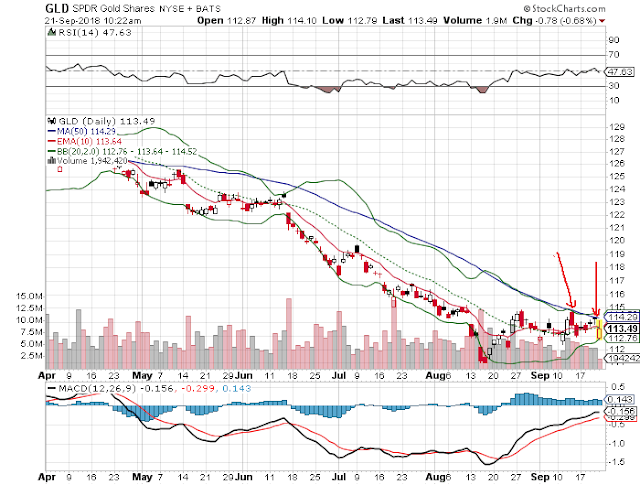 But at the same time, the Forces of Liberty and Jebus aren't letting it collapse through the lower Bollinger band, either.

Maybe telling today is that the 8:45 puke of gold didn't cause silver to go into the red.

Email ThisBlogThis!Share to TwitterShare to FacebookShare to Pinterest
Labels: gold

Friday videos: a propos of nothing, Muppets again

A propos of nothing, Muppets

The end of the US bid?

Macro Tourist - the end of the US bid?

Yeah, I think he's forgetting that you can invest in US equities from anywhere in the world, and that everyone else in the world also wants to buy US because Europe is a clusterfuck etc.

But still, maybe you want to read it.

Email ThisBlogThis!Share to TwitterShare to FacebookShare to Pinterest
Labels: DOOOOOM?


WSJ RTE - Trump threatens more tariffs. This is the part that interests me:

Trump administration tariffs against China—implemented, on the way and threatened—would cover just about all imports from that country. That's going to leave a mark. It's hard to forecast precisely how much the economy could slow or inflation would rise. How does China retaliate? How do markets respond? How badly are supply chains snarled? But Oxford Economics estimates that U.S. gross domestic product growth could drop by a full percentage point next year if the U.S. tops off the current $250 billion with another $267 billion in tariffs. With the economy expected to grow at a 2.4% to 2.8% pace (according to Federal Reserve and Congressional Budget Office estimates), that's a significant drag.

FOR BETTER OR WORSE

New tariffs might provide a short-term boost before the long-term drag settles in—if companies respond by importing as much as they can from China before the tariffs hit. Revved up spending and rising inventories could boost growth through the end of the year. A New Year’s hangover would follow as consumers balk at higher prices and businesses stop ordering because their warehouses are stuffed. With interest rates set to go up next week and again in December, the tightening could make the impact of the spending slowdown worse. That's when the impact of the trade fight will be felt, Justin Lahart writes.


Calculating the impact of literally anything is a mug's game, but a rise in inventories always precedes recessions.

Then again, maybe it's housing inventories that are important, not consumer goods inventories.


EWJ has been crazy exciting the past few days.

And the weekly chart looks interesting: 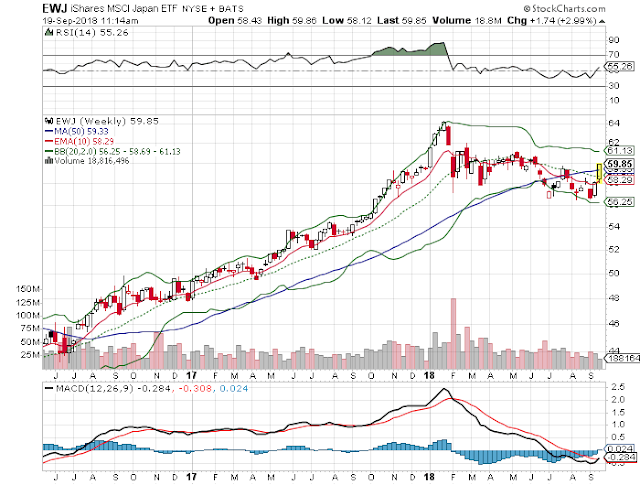 That, my pretties, is a consolidation over time. MACD is now back to neutral and triggered upward. Price is back above the weekly EMA(10) and weekly Bollinger mean, and is presently breaking thru the weekly SMA(50).

An annoying girl in my cities tutorial kept talking about how she was aware of her privilege.

She damn well should be aware, because the only reason she's in university is because her mommy and daddy live in a million dollar home in the 905, and continually voted conservative to drive the working class out of university with high tuitions.

I don't see her using her privilege to do anything whatsoever for the betterment of society, though, because all she knows how to do in 3rd year is blather her own personal opinions.

I'm not a Jordan Peterson worshipper, but he is totally right about the state of social science at university. The problem isn't leftie profs, though: the problem is that the university is full of entitled children of the rich who think they deserve a Ph.D. without doing the work. Meritocracy only existed at university as a way of weeding out the poors; with tuition at $7500/y., it's back to the old 19th century French model of the leisure class being given candy for writing bullshit.

Until the 905 mommies and daddies accept that they've parented their children badly and they should be punished with downward mobility, nobody will allow these profs to instil proper rational thinking and work effort into these brats. And so the collapse of western intellectualism will continue.

As an aside, my most Marxist prof at Mac (and yes, he really used to be a Marxist) also gave us the heaviest workload by far. And his final exam was a brutal 3 hours of constant writing. So no, it's not cultural Marxism that's the problem: it's letting kids go thru undergrad and grad without ever learning argument, rational thinking, standards of evidence, or empirics. 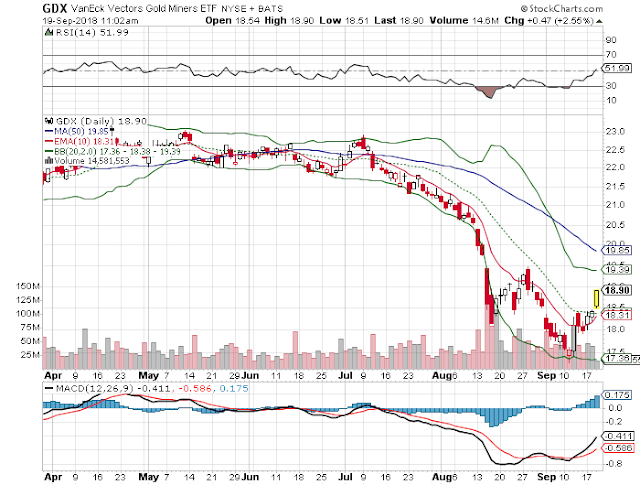 A positive break upward through the EMA(10), a heavily oversold MACD and RSI, and RSI and MACD divergence over the past month all pile together to make this chart constructive, at least in the short term.

Gold has also failed to break down below $1200.

I guess someone's bailing out the Turkish banks, then?