The Beloved, doing a very trancey song that sounds out of place for 1990 UK:

Trying to gain more perspective on what broke


So, after the panic has apparently subsided, or at least gone into a short-term lull (hard to tell with volumes the way they are), let's try and puzzle out what broke.

Obviously the $VIX system broke. XIV is dead, and that means that a major market mover of the front 2 months in the $VIX futures option market has died.

$VIX futures are a signal for bots. I mean hell, I'd program a bot with a $VIX futures input. But the signal today means something completely different than what it meant a week ago, because XIV is no longer trading the front 2 months. That is a really big change; of course, eventually the big boys can switch to implementing in-house front-month CBOE $VIX futures strategies to replace the XIV mechanism they had been outsourcing to Suisse.

So the US equity market mechanism won't fully recover until all the bots are reprogrammed to take into account the change in $VIX futures participation.

Bitcoin? Yes, that broke too, but who fucking cares? I cannot see why any serious market participant would buy or sell based on the goings on in an OTC Ponzi scheme, which is what bitcoin is. That won't move pensions, and it won't move Goldman's prop desk unless they're morons.

US economy? Nothing wrong with it right now. The Fed even under Powell won't raise rates so high that they kill investment, and investment ultimately is what drives the economic cycle.

Do stocks need to come down to a lower P/E for prices to be sustainable? Maybe, but if so, why aren't Republicans still puking stocks today? I don't think that asset inflation has suddenly stopped; in fact, giving more income to the working class through minimum wage raises will actually provide a hell of a lot of support to consumption at the bottom end of the Keynesian cross. Earnings growth may actually come, though unfortunately the timing of that is different than it's ever been before because the bourgeois rentier sector has already had their own recovery.

Yabut, if interest rates keep rising, won't that hurt anyone? Well, rising US interest rates should kill emerging markets, if the past is any indication. They haven't been murdered yet, despite the US having gone into a bull market. Maybe a year or two of higher rates will bring about some major crisis in EMs, which this time around will kill the world economy much worse than it ever did before. But for now, all is swell.

It's hard to tell what to make of the lull that's seized the market by noon today, except perhaps that everyone is done doing whatever they wanted to do and are now busy retooling the bot army.

Just heard on CBC: the bottom in the market is in

"Stock markets around the world are in free-fall. Are we headed for a correction? Tonight on The National!"

Because the story has now made it to CBC, which used to be a decent news service but now has become a laughingstock in Canadian news, with a stated policy of ensuring every radio news broadcast has at least one story on fucking native people that nobody cares about, I hereby call the bottom in the S&P.

In crashes below -2SD, I've seen a recovery to -2SD then a return to crashing before.

Might happen again. Who knows. Around $267 is a critical number.

By the way, do you guys holding gold stocks still feel all smug? Y'know, with them being hit in the broad equity selloff?


This is only Zerohedge-level news, but apparently XIV's drop extended to beyond 80% after the bell, which means the short volatility ETF is going to liquidate.

I knew this sort of thing could happen, because I bothered to read their prospectus.

But if people were in XIV just to make 5x the return on SPY, and if people had piled into XIV in the past month as the stock market assploded upwards, then there will be true carnage today if XIV really is being liquidated. Lotta people going to $0.

That'll mess up the $VIX futures market for a bit.

Which also would suck because, had XIV survived, it'd be a fantastic buying opportunity right now.

By the way, $VIX intraday premarket right now is around 50.


UPDATE: I just checked my trading account, and apparently HVI.to, the Canadian version of XIV, still exists. Which is funny cos that means the US XIV collapse is just because of a panic selling run. As of 9:33 though, I can see no trades having gone through, and Bid=Ask, so it looks funny.

No, I wouldn't buy HVI.to right now, cos I have no idea (haven't checked) if it's tethered in any way to XIV.


UPDATE 2: XIV is officially terminated. So long to a great beta machine! You were warned in the prospectus, people.


UPDATE 3: HVI.to is not terminated yet, just halted (as of 9:52 AM). They're going to have to figger out whether they're still alive, I guess. This proves the XIV collapse was just bots selling into nonexistent bids. Which, again, we all knew could happen in all sorts of things.
at 6:26 AM No comments:


And some evening reading:

FT Alphaville - someone on the internet was wrong. Apparently the idiots talking about US debt were wrong! This has never happened before!


Jared Bernstein - guess who's getting the raises? Yeah. The rich. Who don't consume as much as they buy assets. Factor that into your "inflation" estimates, Jerome Powell!


Three years earlier, Melin had been attending Indiana University Southeast, commuting from his mother’s house. He could not shake the feeling that he was paying for something that was not worthwhile. He was learning more from economics podcasts than he was from his classes.


So he dropped out and pulled the remaining $22,000 from an education fund his mother had set up for him. He invested in cryptocurrency.

That's where this guy's cunning plan starts to go wrong. Oh well... the little right-wing cuntbro will learn a lot about libertarian economic theory over the next 60 years as he works as a fry cook in Kentucky for $7.25/hr. because he blew all mommy's dough. Hey, maybe one day he can graduate to coal mining?


Solar energetic particles can rip through the sensitive miniature electronics of the growing number of satellites circling the Earth, badly damaging them. The satellite timing systems that govern electric grids would be likely to fail. The grid’s transformers could be torched en masse. Because grids are so tightly coupled with each other, failure would race across the globe, causing a domino run of blackouts that could last for decades.


Vanity Fair - the Mooch recalls his ten days in the swamp. Yes, Trump's White House really is that fucked.


End-of-day charts, then I'm off to do schoolwork: 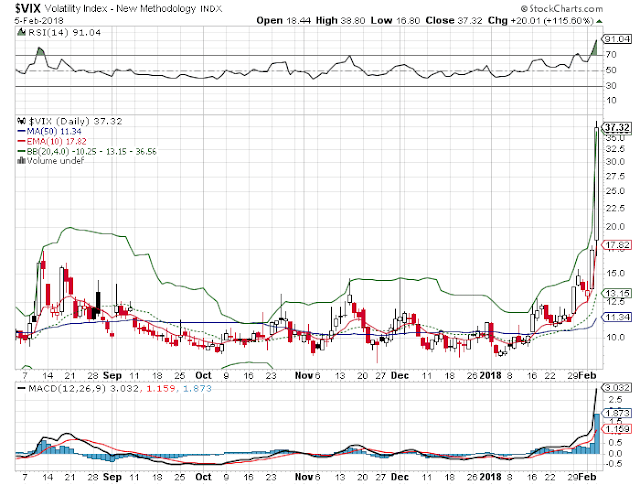 $VIX is +4SD up. It's dumb to think it can go higher: an 80 intraday is the most I've seen in the past few years. So there may be another day of carnage, but eventually this has to exhaust itself. 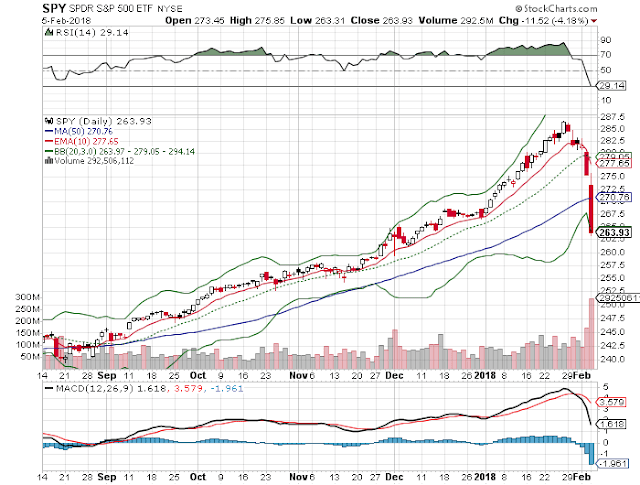 SPY is -3SD, and this is half a week's volume in just one day. All those bozos who flooded into US equity ETFs in the past month now have to flood back out, so I dunno if this is actually done yet.

And the $VIX term structure is fucked all to shit now. There is no not-backwardated month. If this was like the past ten years, you could make a lot of money shorting $VIX futures from a starting point of 23 on the March. Wait til the front two months move back to even, wait for a last dry-retch, then short $VIX and profit.

The S&P is still trading at a high multiple and a low yield, and starting today that means something. No, not because of bonds.

I'm wondering if we're starting to see the market realize this.

So I want to sit and wait, cos I'm not sure I want to buy until everyone out there knows whether or not this is what's going on. Cos a major rotation into money market would take a hell of a long time to digest. Hell, just the port allocation strategy changes would be a bitch.


My perspective on the market is this:

1. If you were kicking yourself because you were out of equities at the start of January and missed the pop, you should be happy right now because you have a chance to earn that money all over again.

2. If you are tooting your own horn because you got out on Wednesday or Thursday and locked in your gains, you should be happy right now because you have a chance to earn that money all over again.

3. Everyone else out there with half a brain already is thinking the same way you are.

5. It's about time the Republicans who piled into the market over the past year get washed out.

And as for the day to day:

6. The $VIX is +3SD daily and weekly, so expect big upmoves intraday. Longer-term, though, the regime has changed and you have to get a handle on the new flows before you can say you know what's coming next.


In 1994, there was a rate shock when Alan Greenspan recognized that the Fed was too easy given the boost in economic growth coming out of the 1990-1991 recession (Desert Storm, S&L Crisis, etc). Greenspan addressed this with a 25 basis point hike in February 1994 and then continued to push overnight rates up by a combined 225 basis points over the course of the year. Yields on the 30-Treasury jumped 175 basis points to 7.75% in the first 9 months – which helped destroy the finances of Orange County, CA, push Mexico into a financial crisis and wreak havoc across Wall Street. It became known as the Bond Market Massacre, and the stock market wasn’t immune, with a huge correction occurring that spring.
Here’s what it looked like, for the Dow Jones Industrial Average (in percentage terms from the start of that year):

The lessons:
* The Massacre in the bond market spilled over into the stock market as participants adjusted to the growing pains that come along with a faster economy than they had been expecting.
* Good economic news does not equal more stock gains.
* Every asset class is in a competition with every other asset class for investment dollars. When the dynamics in one asset class change (you can now earn 1.5% in a money market account, as opposed to zero), investors in the other asset classes will make changes to their portfolios. This is happening now, as REITs, Utilities and other high-yielding sectors of the equity markets see investor interest walk out the door – there are now less risky ways to earn income thanks to higher nominal interest rates on Treasurys.
* The recovery for stocks as investors grew accustomed to the new environment of faster growth / higher rates did not take long. Within a year of Greenspan’s February hike, the Dow had bottomed. Enormous stock market gains from 1995 through 1999 were on their way, though no one could have known at the time.
* All things being equal, an accelerating economy with increased wages and rising business spend is a positive for America, especially when coupled with a mirror image scenario happening in countries all over the world. But that doesn’t mean every day is a picnic for the stock market.
* We’ve grown accustomed to slow growth, low rates, high multiples. Now the game is changing.