Some fake news on this fine Saturday:

Jared Bernstein - should they stay or should they go? Bernstein notes that USD strength has done the work that a rate hike would be meant to do. Personally I wouldn't be surprised by a March hike. Firstly: the Fed knows they have a more hawkish administration that wants higher interest rates and doesn't care about screwing workers. Secondly: the US economy has shown some strong underlying data this winter, while previous winters have seen recessionary indications. Thirdly: equity markets are too frothy, and faster rate hikes would reduce the chance of a 2000 bubble.


New Deal Demoncrat - meanwhile, M2. Dude, I really think you're just freaking out because Trump is in power.


IPE Zone - how much tourism will Trump kill? Quote:

Though flight prices are holding firm (they usually take weeks rather than days to adjust to consumer trends), Kayak has identified a knock-on effect on average hotel prices. It found prices in Las Vegas are down by 39% and New York City by 32%.


The Nation - after the fumble. A decent long article on how the Democrats screwed themselves by turning their back on workers in favour of upper-class elitist paternalism:


While many Democrats absorbed his analysis of the conservative movement, it appears they ignored another message in Frank’s books: that the Democrats themselves had abandoned heartland voters by ridding the party of its traditional class politics. In Listen, Liberal, Frank poses this challenge directly. He begins the book with an indictment: “There are consequences to excessive hope, just as there are to other forms of intemperance.” While the Republicans are the party of the plutocrats, they succeed only because of the Democratic Party’s stark failures. These failures, Frank says to his fellow Democrats, are “ours,” and “it’s time to own up.”

But because it's only working-class smelly white trash like Michael Moore and scary anarchists like Thomas Frank saying this, the Democrats will continue to ignore the truth.


Reuters - Mike Pence used private email server while Indiana governor. OMG who does this Mike Pence woman think she is? Lock her up!:

U.S. Vice President Mike Pence used a private email account to conduct public business as governor of Indiana, his office said in a statement on Thursday.

The private email account was first reported by the Indianapolis Star, which said Pence used it at times to discuss sensitive matters and homeland security issues.

Well, at least this story doesn't have any Russia connection....

The account was hacked last summer, the newspaper added.


These guys do a pretty good job of the brilliant BWV 1065:

Calculated Risk - vehicle sales over 17M SAAR. I mean, sure, the market has run up way too far way too fast. But I never see a scary, negative piece of economic data coming out of the US.

FT Alphaville - an anti-gay ETF. Wait, I thought that was GLD?

Foreign Policy - Trump looks to bypass WTO rules. And you probably can, if you find enough lawyers. And if not, Canada's experience with softwood shows that at least you can keep illegal tariffs in place for years on end while the dispute runs through the system.

Gavyn Davies - whatever happened to secular stagnation? Whether or not it's actually happening, the fact is people aren't talking about it. And expectations being a big part of economic growth, not talking about it might alone be enough to make it go away. No, really.

One such failure to take into account elementary psychology was on display in an article a few days ago, wherein Larry Summers, in the course of lambasting the rubes for trying to undermine global trade, concluded:


A strategy of returning to the protectionism of the past and seeking to thwart the growth of other nations is untenable and would likely lead to a downward spiral in the global economy. The right approach is to maintain openness while finding ways to help workers at home who are displaced by technical progress, trade or other challenges.


To which the appropriate response is something like: "Well, you f*****g genius, how many decades have you had to study the problem??? What have you ever proposed?"


To be fair, NDD, every single fucking competent trade economist already knows that trade liberalization creates winners and losers. But liberalization also creates enough new aggregate wealth that the government can compensate the losers for the entirety of their losses by taxing some of the winnings of the winners, and the aggregate economy still comes out ahead. This is 3rd year undergrad stuff, everyone already knows it.

FFS there's a whole chapter in Rodrik's The Globalization Paradox that goes into this. Read that book.

It gets complicated when you incorporate the positive feedbacks (and costs of institution rebuilding) of economic geography, but the argument still maybe holds. Dunno for sure because mainstream economists don't like studying the complexity of the real world.

The problem is that conservatives (and you can include Clinton in this, and also Summers who was on his CEA) are anti-tax and anti-redistribution. So they intentionally implement trade liberalization without bothering to tie in the required compensation.

It worked in their favour, because now they have created a mass of angry underemployed through the rustbelt.

You need to study political economy, not psychology.

Get Back Jojo - interim top in the gold miners. He posted it right before yesterday's carnage.

As far as my own opinion, I have a TA one and a fundies one.


TA: I was looking at that SMA(50) at $22.50 or so and thinking that would be a decent target for a retest of the January breakout which so far has never been tested... I just thought it would be a gentle month-long drop hugging the bottom of the EMA, not a one-day puke. A successful pivot at the SMA(50) is positive for miners, but a drop straight through the SMA(50) bodes badly.

The problem with that is that even a successful retest may print an intraday as low as $20, especially when selling has been so heavy so far.

Also, gold yesterday turned back at the SMA(200), which is also the support point that failed back in November; so is someone thinking gold is going to drop here, and they want to dump miners ahead of the gold drop?

Fundies: obviously someone big bought the GDX and GDXJ a while ago, because the ETF-heavy miners took off higher than the less-ETFed miners. And now they (or someone trying to shake them out) are puking these same ETFs into an empty book, in a way that makes everyone else pull their bids. Which looks more like intentional sabotage than fundamental-led selling.

Especially with gold failing to collapse.

So did this just happen because President Piddles is speaking today? Is he supposed to somehow tank the price of gold? Y'know, with his lack of economic growth and his Republican deficit spending and his sabotaging the dollar and his sowing of geopolitical uncertainty?


So as usual, I really have no clue what's happening next, but I don't see any fundie reason why the December tax-loss low in gold and the miners should be retested, absent a change in broad outlook that's larger than the paradigm shift we were already hit with when we found out Trump won the election. And I doubt we'll see anything bigger than that coming out of Trump today.

And I'll be interested in watching how non-ETF miners do relative to ETF-heavy miners. I'm lucky to own one junior goldco that saw buying yesterday, on huge volume too, even with all the other miners getting sold: that really screams an ETF-only move, here.

And I'll be interested in seeing if GLD (and especially SLV) continue to act as if nothing's happening. Problem with slamming GLD and SLV is that real people buy and consume those metals.

And I really think after Trump's big bang today, the next thing for the US indices to do is stop and let the SMA(50) catch up, at a minimum. We're 5% above SMA(50) right now, and that was the cue for the market to calm down in December.


Someone in Germany has a sense of humour: 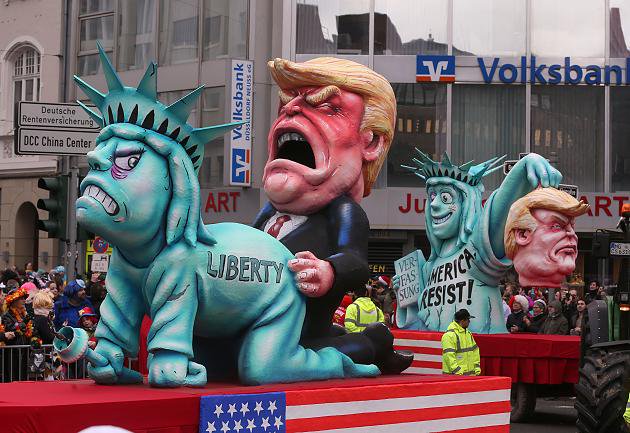 
I've got a shit-ton of "Is Daniela Cambone married?" google search hits on my blog today, so I figured I'd go check the Kitco channel to see what the heck is up. Did she interview Casey again? Or some loon like Greenspan?

Not, but she positively glows in this cute pink dress:

And Garrett Goggin says something or other about stuff too but it's kinda hard to get worked up about him when Daniela's in shot.

And btw no, I'm not going to PDAC this weekend, because I have work to do for school.

Email ThisBlogThis!Share to TwitterShare to FacebookShare to Pinterest
Labels: Our Daniela

New Deal Demoncrat - weekly indicators. He's interested now in low M2 numbers. Which makes me wonder, by the way... if a bunch of Americans go buy stocks all of a sudden, does that drop M2?

NY Times - economists have been demoted in Washington. Then again, many past economists like Laffer and Greenspan weren't really economists in any sense of the term.