Gutsy Trump election prediction: under 30% of the popular vote


I've been watching interviews of Trump supporters at rallies, and I've come to the conclusion that, despite Trump polling at 44% nationally as of yesterday, even if he doesn't dig his hole even deeper, he is still going to poll under 30% come election time.

I worked at a market research company for years when I was a kid, calling people to do surveys. Yes, the only political work I ever did was a very short Harris poll a few times, most of it was market research; and most of the time I only called Canada, though we did for a while have one big contract calling the USA (for a Canadian cigarette company, I think). But the principle of what I write below still holds.

There is a certain type of person who usually refuses to respond to surveys. They're sometimes just reticent, sometimes generally just pissed off at calls from strangers, sometimes just refuse as a matter of principle and that's okay. Some of those people will refuse to answer a specifically political poll, because they like to keep their political beliefs personal, and that's also okay.

However, a significant nonzero part of the refusing population are refusing simply because they're ignorant fucking fruitcakes.

Those fucking fruitcakes would refuse in 2000 when called for a Gore/Bush poll. They refused in 2008 for the Obama/McCain poll. Simply, that's what you do if you're a fucking fruitcake who hates politics: you refuse, mumble something incoherent or plain ignorant, and hang up the phone. Trust me, I experienced this.

In 2016, however, given what I've seen of Trump rallies, it seems to have become fashionable for fucking fruitcakes who hate politics to have a political opinion and espouse it for the whole world to see.

And guess what? The fruitcake population doesn't vote. Some are nonvoting felons, some will be too drunk or lazy that day to go out, some are even ignorant of how to vote in the first place. You're seeing some of those people in the press today, blathering on about how they want to go to a polling station carrying guns to intimidate people for Trump, not understanding that this is the best way to get yourself shot ten times in the fucking face by an armoured fucking SWAT team. They have never been to a polling station.

Basically, nonvoters have self-selected themselves into the pool of counted Trump voters. So when the poll says "44% for Trump", you can count a certain number of those voters out come election day.


The people who do vote are little old ladies. And, I guess, business owners, people who like to exercise their civic duty, and maybe a few hardcore cranks.


South China Morning Post - Clinton shows how to lay the smackdown on Chinese territorial ambitions. This is happening while Russia tries to get the American public to fap over Podesta's fwd:fwd:fwd:fwd:kitty.gif emails:

In the paid speech to Goldman Sachs, Clinton said she confronted Chinese officials about the South China Sea during her tenure as secretary.

“I said, by that argument, you know, the United States should claim all of the Pacific. We liberated it; we defended it. We have as much claim to all of the Pacific. And we could call it the American Sea, and it could go from the West Coast of California all the way to the Philippines.”

She said in the speech that she had told her Beijing counterparts the Chinese claims to the South China Sea were based on “pottery shards” from “some fishing vessel that ran aground in an atoll somewhere”, whereas the US claim to the Pacific would be based on “convoys of military strength” in the second world war and the claim Americans “discovered Japan”.


Thanks, Russkies! You just proved that Clinton has the balls to go toe-to-toe with China over the South China Sea!

To an elite group of Republican contributors who have donated millions of dollars to the party’s candidates and committees in recent years, the cascade of revelations related to Mr. Trump’s sexual conduct is grounds for the committee to cut ties with the party’s beleaguered standard-bearer, finally and fully.

“At some point, you have to look in the mirror and recognize that you cannot possibly justify support for Trump to your children — especially your daughters,” said David Humphreys, a Missouri business executive who contributed more than $2.5 million to Republicans from the 2012 campaign cycle through this spring and opposed Mr. Trump’s bid from the outset.


OK, so you had no problem justifying your support when Trump said he'd build a wall along the Mexican border, and make the Mexicans pay for it by confiscating cross-border remittances?

You had no problem explaining to your children what you liked about Trump's attacks on the family of a dead US muslim soldier?


It gets even better.

CBS News - Trump once said of a 10-year-old he'd be dating her in ten years. No words... should have sent a poet:

In an “Entertainment Tonight” Christmas feature in 1992, Trump looked at a group of young girls and said he would be dating one of them in ten years. At the time, Trump would have been 46 years old.

The video, released Wednesday evening, was shot at Trump Tower.

In the clip, Trump asks one of the girls if she’s “going up the escalator.” When the girl replies, “yeah,” Trump turns to the camera and says: “I am going to be dating her in 10 years. Can you believe it?”


Y'know, at this point, if you're saying you're still voting for Trump, I can say the following about you:

2. You have not had (unpaid) sex in decades, and never will again, unless maybe you've drugged her first.

Trump... what is this I don't even


This whole thing has already jumped the shark. FFS.

And here's some context for you:

“Now, somebody who a lot of people don’t give credit to but in actuality is really beautiful is Paris Hilton,” he said. “I’ve known Paris Hilton from the time she’s 12, her parents are friends of mine, and the first time I saw her she walked into the room and I said, ‘Who the hell is that?’”

“Did you wanna bang her?” Stern asked.

He then went on to call Hilton “dumb like a fox” and admitted that he had watched her sex tape.

Trump: the gift that keeps on raping even more

And this one's even better:

People - Trump likes walking in on half-naked 15 year old girls in the changeroom.

You don't see none of this on Marketslant.com, do you?

Trump: the gift that keeps on raping


People - People magazine reporter writes about the time she was sexually assaulted by Trump.

Meanwhile, the Trump campaign is threatening to bring up more stuff about Bill Clinton, in the hopes that this drives women voters away from Hillary.

This shows they don't have any actual women on the campaign team (except Kellyanne Conway, who's gone so Stockholm Syndrome that I doubt you can call her human anymore).

Women, however, especially young women, tend to run away from a pervy 70-year-old who's left a trail of unreported sexual assaults all across the country. They run even faster when they hear him brag about how he can get away with it. They certainly don't hand him the most powerful position in the country.

Trump's chance of victory is vanishing like a clump of orange orangutan hair down the toilet drain.

Why? Maybe because of these polls from the last 24 hours:

Bloomberg - Clinton 7% ahead in WI.

I guess the problem with pissing off blacks, Mexicans, and women is that they're all allowed to vote in the US, huh? Uneducated, unemployed angry 50-something white men just aren't numerous enough to hand you the White House all on their own, so it seems.

Well, when Hillary wins the entire rust belt, we can put to sleep this fucking pig-ignorant idea that the new Trump Republicans are the party of the working people.

BTW, what people aren't talking about is Clinton pulling even in North Carolina. This is important because Virginia surprised the world by swinging to Obama a few years ago, and everyone predicted NC would be next because it's so demographically similar.


I'm not even going to link to the article. Instead I'll just reprint the pile of horse manure that Dana Lyons passes off as TA: 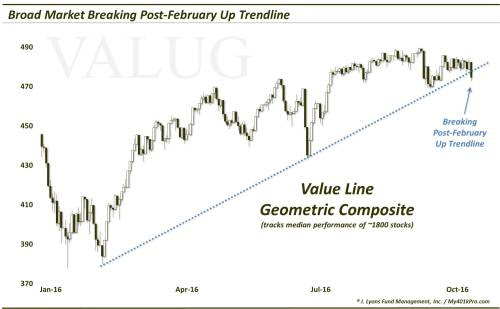 Really, Dana? The Value Line Geometric Composite index? You couldn't find any other indices to write about?

And didn't they teach you in TA school that you draw your trend support line based on the close and not the intraday low?

And why is it so scary that the VLGC is breaking that little blue line that you drew? Has the market given your hacked Photoshop the power to determine buy and sell points?

And why aren't you showing us what happened before January 2016? Is three "trend-identifying" datapoints one too many for you?

Hope you get lots of stupid people subscribing to your paid newsletter, Dana!


I've said this years ago, but the point still holds.

Nice to know, though, that Wordsalad reads my blog, especially where I pointed out on Friday that US manufacturing is at an all-time high.

Let's see you go bearish SPY today, Wordsalad. It's the fat pitch you've been waiting for, right? I mean, it's the obvious move, isn't it?
at 6:34 AM No comments:

MARMITEGATE: you've got to be fucking kidding me


It's not that I haven't been posting, it's that there's been utterly nothing newsworthy at all.

Now, it seems what is now being called 'marmitegate' has hit the shop floors.

The Telegraph visted three central London Tesco stores to see whether after only a day there would be any impact on stock.

Are Brits panic-buying that opinion-splitting brown spread? Or is there nothing to worry about?

The shops do not seem to have run out of Hellmann's Mayonnaise yet, or Persil and other washing and cleaning products.

Pot Noodles were also available, although in the Caledonian Road Tesco Metro, shoppers could no longer buy single packs of the Classic Curry flavour.


High drama in the UK!

Look on the bright side: The press has now demonstrated that the British public remains open to the classic Coronation Street plot arcs about Annie Walker buying a replacement teacosy, or Albert Tatlock complaining about "all that foreign muck". No need for Gail Tilsley's next boyfriend murdering people again, the Brits remain open to the 60s high drama of the proletarian Oop Norf.

Oldie but still a goodie: 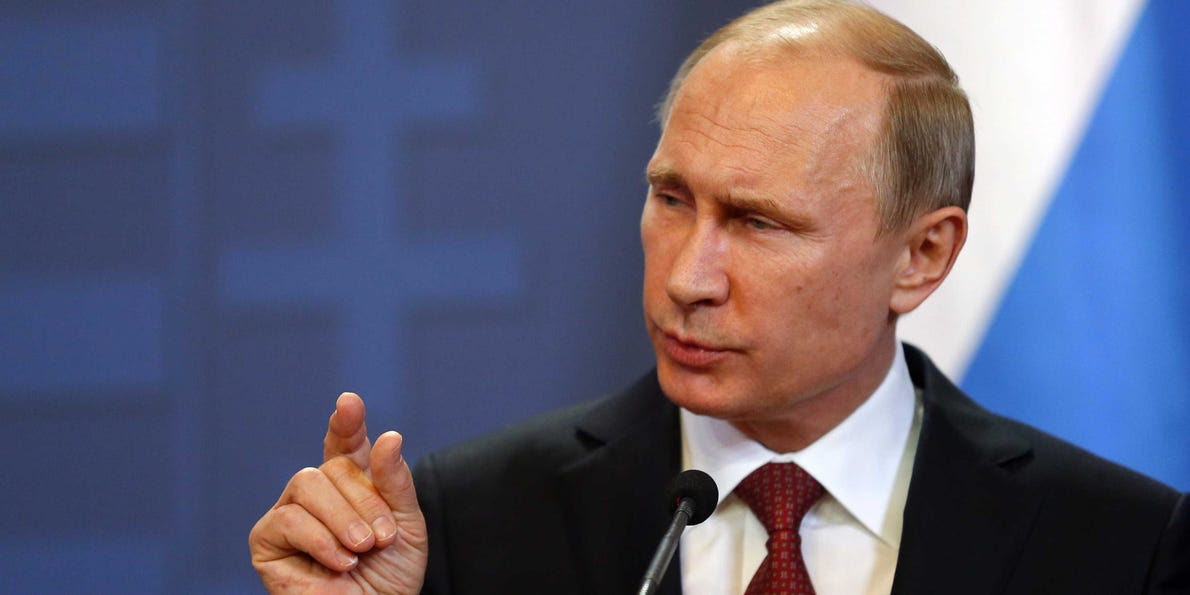 Condoleeza has seen the intel, and she concurs: Email ThisBlogThis!Share to TwitterShare to FacebookShare to Pinterest
Labels: if it's one thing I hate it's dong weakening, Pooty-poot
Newer Posts Older Posts Home
Subscribe to: Posts (Atom)