parts 2 and 3 after the break:

Calculated Risk - yeah, about that "horrible" jobs report.... He provides a chart with the best years for job creation, and the worst month in each of those years, and thus demonstrates that nearly every great year for jobs has at least one bad print. In other words, quit piddling your frilly pink panties.

Chronicles of Brodrick - various stuff. He quickly dismisses the jobs report by noting a major grocery chain was on strike last month. Sure, he's only getting this from a Business Insider article, but I'dd rather link to Brodrick anyway.

Reformed Borker (Bork Bork Bork!) - stock picking sucks. Hey Josh, ever hear of "supply and demand"? Well, there's a limited supply of alpha, isn't there? So if stock picking increases, alpha gets arbed away and you may as well just buy SPY.

Peter Brandt - a bearish technical case for precious metals. Has anyone been telling you about the descending triangle for silver, and how that's very ominous? This guy will, and he actually trades commodities.

Bloomberg - China state media directing people to buy equities. This is an article for those little clever shits like Josh Brown who think there's some fundamental basis for buying Chinese stocks. Sure, P/E of 11 might be a bargain for a country with 7% annual growth; then again, do you want to be buying China right after the government has told its citizens to buy stocks?

FT beyond brics - why is India such a fucking basket case? If you thought Narendra Modi can just wave the Holy Handbag of Margaret Thatcher and fix the country, you need to read this article.

Mining.com - Goldman's Currie still thinks gold drops to $1050 this year. We're holding you to that, Currie. Sorry if you didn't know this, by the way, but the price of gold has nothing to do with the US dollar because Americans don't buy gold.
at 6:07 AM No comments:

Friday videos: Scala explains where Garbage stole all their ideas from


Here's the band made up of all the people who quit Seefeel, explaining where Garbage stole literally all their musical ideas from:

Sarah Peacock is singing actual words in this song, and that frightens and confuses me.

US dollar strength and the art of having a clue 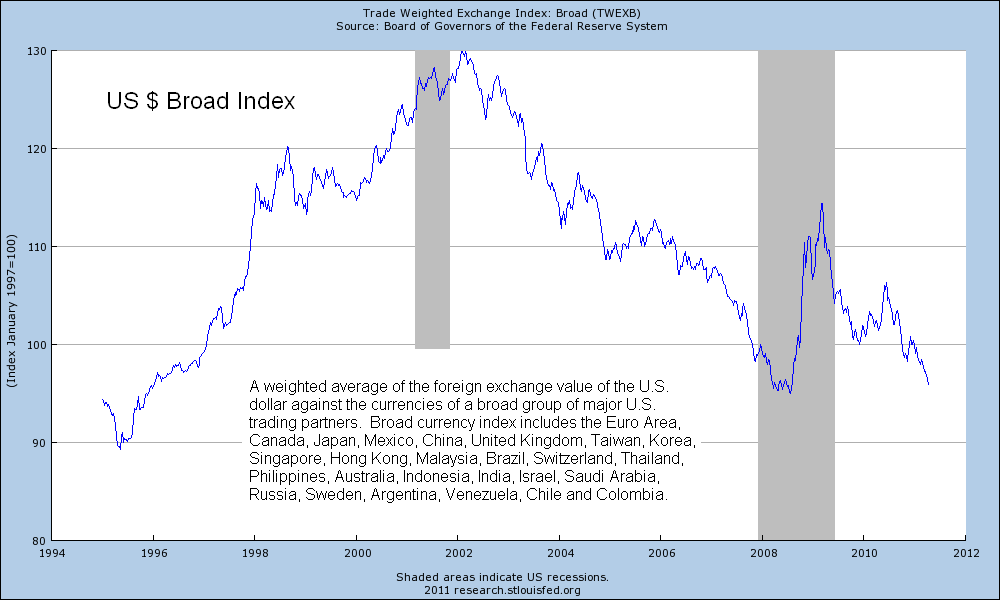 Look at the chart period 1995-2000, look up S&P 500 performance for that period, and tell me again how a strengthening US dollar is negative for the US economy.

Look at the chart period 2002-2008, look up S&P 500 performance for that period, and 'splain to me how a weakening US dollar is good for the economy.

Email ThisBlogThis!Share to TwitterShare to FacebookShare to Pinterest
Labels: charts, realizing you're a fucktard is the first step toward changing things


Well, that was a fun year: 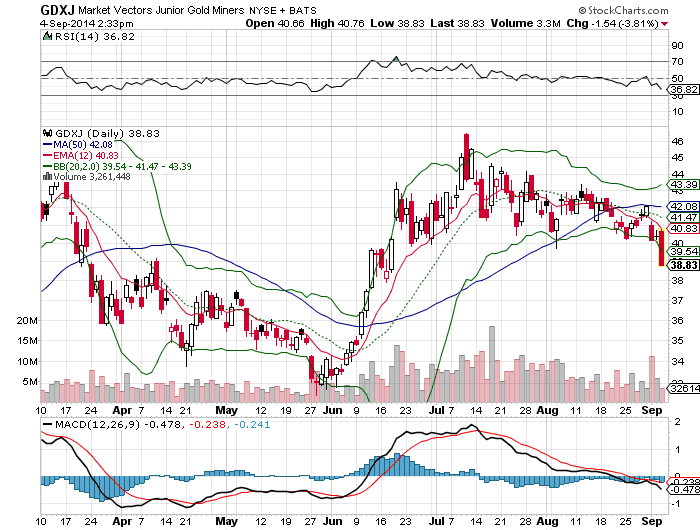 With no apparent interest in the September seasonality, or perhaps a disbelief in India's ability to buy
gold this fall, it looks pretty much like GDXJ is all over except for the tax loss selling.

BI - US auto sales crush expectations. And because you've been stuck in a bear market for a decade, you need to be reminded that this chart: 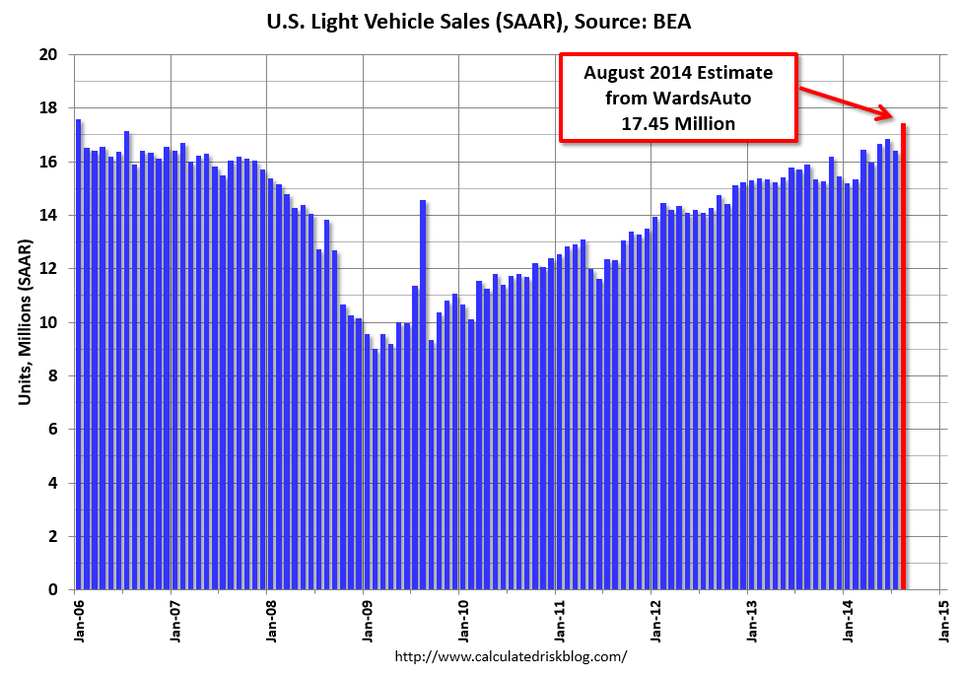 is not peaking. It is not peaking in exactly the same way that the S&P was not peaking at 1550. US auto sales are going to break through 18M and continue upward, because that's what happens in a secular economic expansion.

FT beyond brics - Jim O'Neill on how EMs don't suck yet. He's still smarter than the average snooty City bastard, our Jim, so we may as well see what he has to say about the future for EMs.

Ritholtz - idiot Adam Parker from MS finally capitulates. After only a 200% rise in the S&P? What a wimp! He needs to be more like Doug Casey:

IKN - Casey will never capitulate on the same old collapse bullshit he flogged in 2008. Now with an update for more Casey goodness!


Here's something that's been on my mind;

I don't know how to do a ratio chart in Yahoo Finacne, or if such a thing is possible. So you'll have to use your mathematical imagination, if you have one.

Anyway, I've been looking at the 2000-2009 bear market, and saw that some of the best performing stocks were transports - railways, to be specific. If you bought UNP in 2002, for example, you never experienced a bear market whatsoever. Some other forms of transport like JBHT also did fantastic.

And when you look at this long-term chart, you see something interesting. The transport index started to stink in 1998.

From 1998-2000 is really where you saw the height of NASDAQ tech stock excess.

So, if you're the type of person who loves to accuse the markets of lying, then you should have seen the lie from 1998-2000 by seeing the weakness in transports. After all, if the S&P was an indication of continued US economic strength, then why wasn't anyone making any money transporting goods? Hm?

The idea behind this is that the transports are the true indicator of underlying growth. You can see it from say 2003 onward: while the S&P had entered a long multi-year consolidation, the Transports were much less horizontal.

4. From 2002-2007, the transports advanced strongly as the US economy continued to grow, but the S&P lagged because it was still overvalued compared to what goods were actually moving;

6. From 2009 to the present, the transports have outperformed, because the ten year bear market made the S&P lag as everyone reacted with disbelief.

And as to point #6, there is an analog in the above chart: look at what happened from 1974 to 1981. There also, the S&P had been in a secular bear market consolidation, and the transports were actually worse off from 1968 to 1974. Then, the transports outperformed out of that 1974 bottom for a good 7 years, til the rest of the market finally quit piddling their panties, and after that the two ran in lockstep to 1998.

And in 2011 the transports printed an alltime new high. Did anyone let you know about that when it happened? Hm?

Anyway, the point of all this was that it looks like you can easily tell when the broad equity market is in a bubble: it's when the broad market is still advancing while the transports are stalled or declining. That's what happened from 1998-2000.

And by the way, you won't see this on a day-to-day chart; it'll be the longer-term chart that you have to see it in. So don't bother listening to any clown doomer who says "OMG the transports have gone down for a whole week! Sell sell sell!"

STOCK MARKET CRASH IMMINENT: here's what you need to know 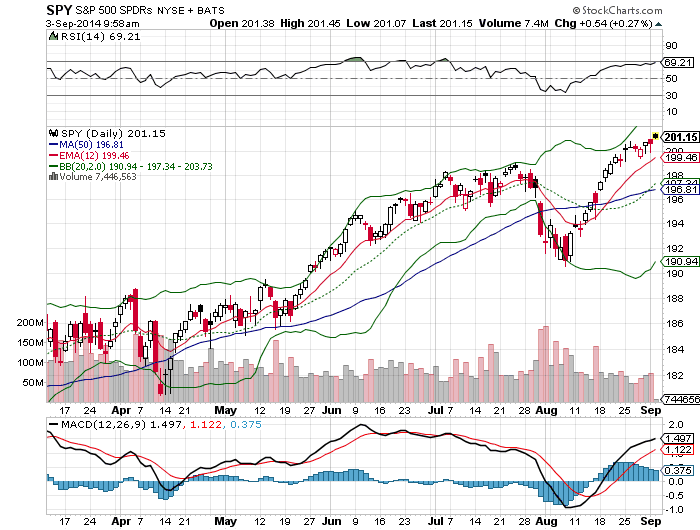 It's still moving up to all-time highs. 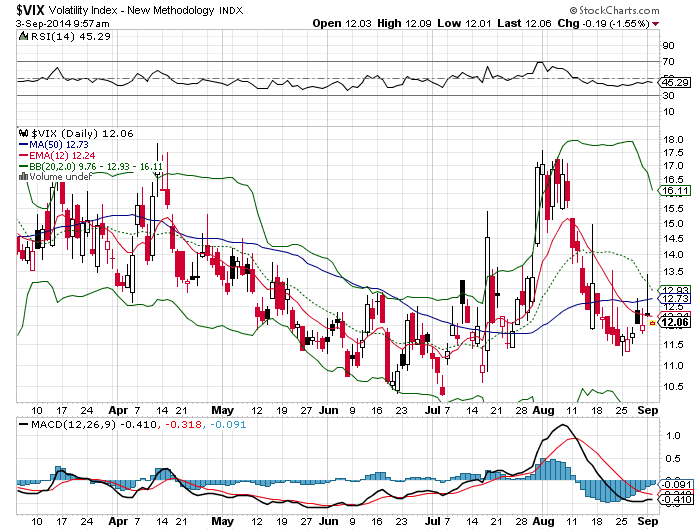 The $VIX has been printing an upward channel for the past week. That indicates a bit of disbelief, and an increasing craving for downside protection. 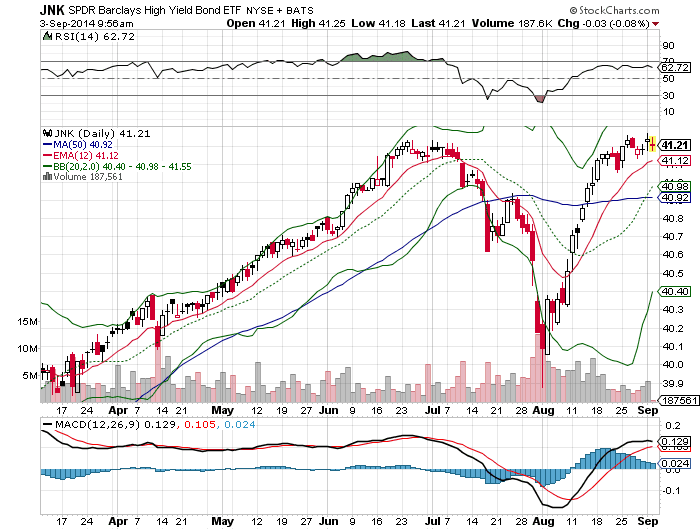 Junk hasn't been moving higher. It seems to be nailed in place.

So okay, I'm not really calling for a stock market crash; but I do think the market is doing something different from what it has been doing, and that's interesting in a finger-on-the-trigger kind of way.

Now let's see if we can get Ritholtz to start piddling his frilly pink panties again.

THE FAPPENING: here's what you need to know


Yeah, you can just go over to /b/ and find out everything you need to know about the Fappening.

Calculated Risk - state and local governments are finally contributing again. And there's your next input for this cycle.

Mining.com - today's fascist American baby will consume a gigaton of crap in its lifetime. Unless of course we start following a low-intensity low-footprint lifestyle. Ha ha.


Krugginator - what's the matter with France? Through the simple examination of data, Krugman probes (as I was saying 2 years ago) the right-wing assertion that France is a socialist economic basket-case of cheese-eating surrender monkeys.

And, of course, it turns out that it's not. It's especially fun to see him note France's economic performance versus that of the noted right-wing austerian dystopia The Netherlands.

This was the reason, two years ago, that I quit reading almost all American commentary on Europe: it's all (except Krugman) utter bullshit, infused heavily with racist attitudes about lazy swarthy Mediterraneans and noble savage Teutons.

There might be a political basis to the propaganda too; socialist countries are supposed to be disasters, so therefore France should be a disaster. Which is funny because the noble savage Teutons also live in a profoundly socialist system; but I guess that's ignored because Teutons also like being fucking miserable, hateful, selfish assholes, so therefore they're true capitalists at heart.

GOLD COLLAPSES ON UKRAINE WAR DECLARATION: you won't believe what happened next 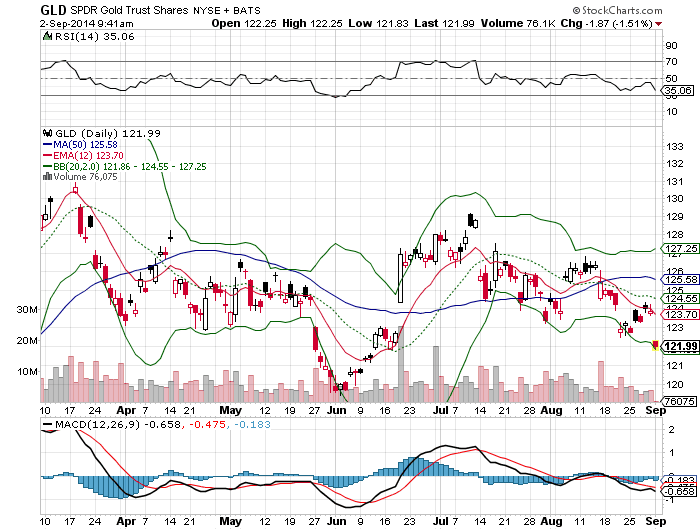 At least it's at the bottom of its Bollinger mean and its downward channel. You'd think that means it can't barf much more, right? At least not today, right?

Roger O'Donnell on the recording of Disintegration


So I stumbled across this bit of trivia:

It's the keyboardist for the Cure back then, talking about joining the band and recording an album with the Cure.

I wish more of the old guard would write stuff like this.


My summary this week is brief: literally every weekly indicator was positive with the exception of mortgage applications, which were negative (although they have gotten "less worse"), and gasoline usage.  Every other long leading, short leading, and coincident high frequency indicator of the economy was positive.


Liz-Ann Sonders - they cut short my vacation to provide a meaningless update. She joins the panty-piddler brigade:


The resilience of the market has been impressive, but has renewed worries about a melt-up scenario as investors "capitulate in" to the market. The problem with melt-ups, however good they feel while underway, is that they typically end quite painful and abruptly.

Yeah well Liz, the nice thing about the S&P 500 is there are sensible metrics you can look at to determine whether the market is becoming overvalued. I respectfully submit that a P/E of 19.19 isn't a bubble level if we're still in a secular bull market. Let it get to 20 and then stall for a year on Fed tightening; secular bull corrections are much more horizontal, remember.


Reuters - India's growth speeds up. Well, I dunno. It's good for gold, I guess. But I still await that soft mooshy feeling of being convinced.