For all you suckers who've piled back into silver, into the gold miners, and so on, thinking we've hit a bottom, thinking things will look better now, here's an inspirational video:

"I'm taking a ride with my best friend; I hope he never lets me down again....."

"We're flying high, watching the world pass us by; never want to come down, never want to put my feet back down on the ground...."

Just remember who's wearing the trousers!
at 8:30 AM No comments:

Friday means nothing. Nevertheless, SIL and GDXJ have both broken above their EMA(8)s.

I haven't seen anything in the charts of the past few months that says these two have done a false breakout from an apparent bottom recently. So maybe this is the end of the downward trend?

BTW, I read yesterday or the day before that GDXJ actually pays a 5% dividend. Wonder which components are contributing to that?

Oh, also... GUY and MAG have surged up pretty strongly, albeit on nonexistent volume. I wouldn't buy MAG just cos it shot up 5% on 16,000 shares. Still, it looks good. FVI, AR, BTO and PVG have all popped above their EMA(8)s. So the strong ones are advancing. Might be time to accumulate... but I'll wait til the $HUI tells me so, before adding anything back.
at 7:51 AM No comments:

I said something a few days ago about wanting to develop a new investing system.

Well, in between playing Civ4, doing chores around the house that have been waiting for months, and generally wasting my time, I've come up with the following:

A simple definition of "going the fuck down" is when something is below its EMA(8), and making a series of lower highs and lower lows. 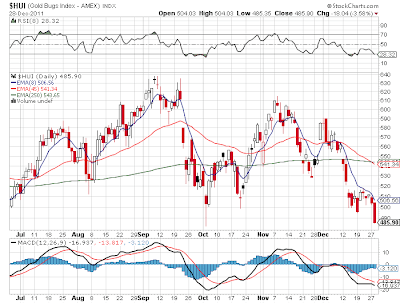 $HUI has failed the EMA(8) and sunk, and that means it's (still) going down. (The failed MACD and the RSI(8) turning back to 30 are both simple functions of the $HUI being below its EMA(8).) Oh look! it's also printed some lower highs and lower lows! 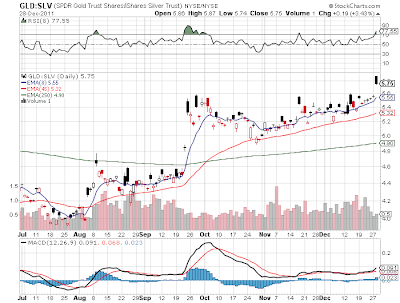 GLD:SLV is Gary T's fave liquidity indicator. It's broken upward into a new range, and that is bad for miners, as (until proven otherwise) they go down whenever GSR shoots up. So don't buy frickin' miners right now. Especially not the silver ones. 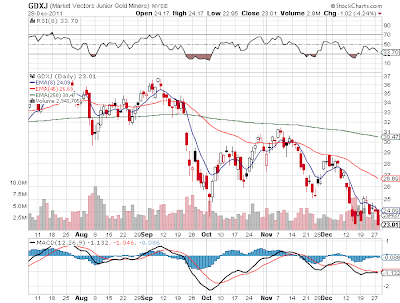 GDXJ is notable for (logically) having a lot of silver miners in it. Again, it failed at the EMA(8) and turned back down. It has a lower high, and is marginally printing a lower low as of today. So don't buy the junior golds right now. 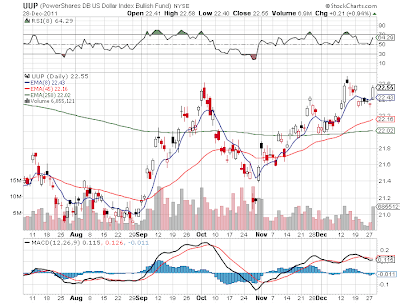 UUP still prints a higher low. Its RSI(8) might go to 80 again, which will mean also a higher high. That's bad for miners, apparently. Don't buy miners when UUP is trending upwards. 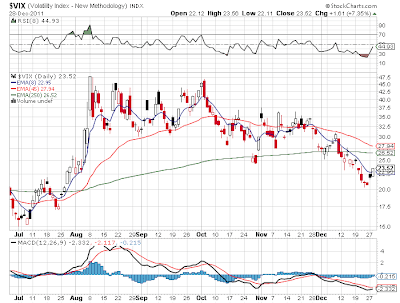 $VIX has finally popped back up above its EMA(8). MACD is crossing up, which of course is just a function of EMA. That means fear is increasing. So don't buy miners. 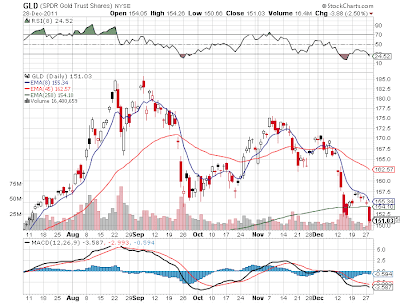 GLD just printed a lower low. It also failed at EMA(8) and is going down. Gold miners seem to mine this stuff. So don't buy gold miners.

Now, you can criticize the simplicity of this. Hey, maybe you want to point out stocks like AR, RIO or LCC, which are maintaining their price in the face of these strong headwinds. That still doesn't give me any reason to buy them right now. If I am going to hold dead money, I'd rather it be the old-fashioned cash kind.

I'm sorry, I have to repeat myself so that it sinks thru my thick skull.
at 2:31 PM No comments: