Boy, Stephen Hawking sure has let himself go

JEFF BERWICK PREDICTED IT ALL! WATCH HIS VIDEO IMMEDIATELY!


JEFF BERWICK IS A MODERN-DAY PROPHET! HE PREDICTED IT ALL! DOWN TO THE NAME AND DATE!

SOMETHING'S ABOUT TO BREAK VERY QUICKLY!

MAKE SURE TO SUBSCRIBE TO JEFF'S YOUTUBE CHANNEL FOR MORE ON THE ELITE'S JUBILEE YEAR PLAN TO CRASH THE WORLD ECONOMY BY OCTOBER 2016!

Here I am getting a degree in economics when maybe I should have just started taking alpha-PHP up the poop chute like John McAfee, and then started posting crazy prophecy shit on Youtube.

The above video is him when he's completely drug-free and sober.


Frankly if the market is going to puke on one stupid bank that was just as shitty months ago when nobody cared, it's a really stupid market.

Which, of course, is nothing new when the market is moved by a bunch of cokeheaded 25-year-old snowflakes of the suburban petit-bourgeoisie.

Hedge funds moving excess derivatives collateral or prime brokerages is … hmm, it looks like this explainer needs an explainer.

Basically this is surplus cash that hedge funds have which isn’t invested, or surplus treasury bills that they don’t need to pledge against their trades, but have hanging around in their collateral account anyway. Big hedge funds always have more than one prime broker, and they’re always moving their surplus around. It’s pretty much zero cost to shift it away from a bank that’s in the headlines and it allows you to tell your boss or your investors that you’re doing something.

But because these balances are so volatile, they’re basically unusable by the bank as a funding source. The excess cash is just invested in cash, the excess securities aren’t re-pledged or borrowed etc. The business is, frankly, garbage for the bank, not worth having except that it’s part of the service provided to a big client. No real funding for Deutsche has been pulled, so far, only excess balances.

[...] If I saw corporate, retail or payments system accounts being moved, I’d worry, because these balances very much are part of the funding of Deutsche Bank’s business, and they do rely quite a lot on “behaviourally stable funding” (basically, in an overnight transactions account, it’s a different set of dollar bills every day, but the aggregate amount across the whole book of a big provider of transactions accounts is surprisingly stable). So far, nothing there.

In Lehman Brothers, the accountants’ joke was true: “On the left side of the balance sheet (assets) nothing’s right and on the right side of the balance sheet (capital) nothing’s left”. That’s not the case in Deutsche. The uncertainty, substantial as it is, all relates to the right-hand side of the balance sheet. The capital might not be sufficient, and the equity might be impaired by a big charge for DoJ fines. Both of these threats come from somewhere other than the left hand side of Deutsche Bank’s balance sheet (one of them is, literally, a number chosen by a regulator, which rather starkly points out how not “out of control” the situation is compared to 2008). If you are a secured creditor — which is to say, someone who looks not to the quality of Deutsche Bank, but to the quality of the individual collateral placed specifically with you — you’ve not seen anything in the last six months to particularly change your mind.


So don't believe the anti-western FUD that Vladimir Putin pays Daniel Ivandjiiski to publish at Zerohedge. The world's not going to end: Deutschebank is just going to crumble into a smoking ruin.


So Zerohedge is all aflutter about Deutschebank's systemic risk, and how it's Lehman all over again.

Except that 2008 was a general run caused by systemic mortgage origination fraud, while DB shares are dropping because of news that they have to pay a fine. Oh, and ten hedge funds moved money out of DB.

This is the same Russian-sponsored propaganda website, of course, that says Reuters is part of a conspiracy to give Clinton inflated poll numbers.

Anyway, Frances Coppola's also waded in, but you don't have to read that article either, since she usually doesn't know what she's talking about, and anyway Forbes expects you to allow over a dozen fucking third-party scripts to view their website.

The basic idea is:

1) Deutsche doesn't (effectively) have $14B.
2) Germany won't bail them out because reasons.
3) thus their shares are going to $0.
4) so they can't raise capital by share dilution, so they'll have to bail in creditors, which causes a systemic hypercollapse.

Which is all fine, except steps 1-4 are all utter horseshit.

Germany certainly can bail out DB. Yes, they've spent the past 5 years insisting that EZ governments aren't allowed to use taxpayer money to bail out their banks, but we know that that rule only applies to swarthy Mediterraneans. Coppola says it'd be "hypocritical" for Germany to bail out Deutsche: I retort that she obviously hasn't met a German in her life, because if it's one thing Germans love to be it's hypocritical.

Will a bailout kill the EZ's existing bank policy? Yes. But it's stupid anyway; it deserves to die. Anyone with sense knows that: just not Weidmann or Schauble.

But all that is moot anyway. The way I'd fix this, if I was the American in charge of collecting the fine, would be to offer Deutsche a payment schedule: say, $1.4B/y for 10 years, plus interest at half above prime.

Deutsche can certainly pay that and stay liquid, since they lose that much money a year on outright management stupidity and gross trading incompetence anyway; Merkel wouldn't have to bail them out; the EZ bank resolution mechanism would stay alive to continue destroying the Mediterraneans; the US gets to book the fine; and, best of all, Deutsche spends the next ten years limping around the banking system like a fat Irish asshole who got kneecapped for picking a fight with the wrong crowd.

And that last bit would be a great way to enforce compliance in the rest of the world's banking system. Cripple the fuckers for ten years and suddenly all the other banks will start paying attention.

But what'll probably happen instead is Merkel will bail them out with German taxpayer money, probably taken out of infrastructure spending and welfare payments; but not before their share price collapses, because after all if it's one thing Germans don't really do it's act promptly when a crisis hits, because it takes so long to pull such big, square heads out of such tight, constipated asses.

After that, she'll insist that yes, no other country is allowed to bail out their banks, just Germany, because they're special.

In any case, quit piddling your fucking panties, everyone. This isn't Lehman, there's no trillion-dollar mortgage origination fraud.

Quit getting your fucking news from ZH.


And now, the DOOOOOM news:

Bespoke - AAII still screaming a buy. Because individual investors get their news from Zerohedge.


Calculated Risk - renter share of single-family market finally starting to decline. And again, that is a good forward indicator for the US economy.

Bespoke - confidence among low income consumers surges. That's because they're finally getting better jobs that pay more, plus a minimum wage hike in the first time since ever. And since consumption is driven by the bottom half of the income set, this also is a good forward indicator for the US economy.

Bonddad - Steve Hayward of Powerline is still a jackass. Well, he works for a site called "Powerline", so what do you expect?

Clinton and Texas: it is to be hoped

A recent poll showed Clinton getting competitive (i.e. within 5 points or so) in Texas.

This is something that some smart pundits warned about 8 years ago; the hispanic population in Texas has been growing, and it's staunchly Democrat.

And if the Democrats start winning Texas, man oh man oh man is that going to change the USA! Texas sets the idiotic school textbook standards for the US: among other things, Texas Republicans are the ones responsible for undergraduate economics textbooks being a worthless pile of Murray Rothbard horseshit.

A Democrat Texas will change the entire US mainstream political narrative.

And that would be very good for the world.

And now you understand why the Republican party hates Mexicans.


No, I didn't watch the debate. I had better things to do.

I'm reading thru various news sites looking for a handle on who the press has declared the winner, and I'm trying to avoid the sites that I know will be pro-Clinton.

But more than someone being declared the winner, what's important is who provided the lamestream media with new talking points and soundbites.

Because a debate only happens once, but a good soundbite can keep giving for weeks.

And I think Clinton won in the soundbite department. All Trump did was re-hash old Republicunt talking points; Hillary, however, scored some new ones that (you'd think) should tilt reality-TV newsmedia in her favour.

On the subject of his tax returns: "There's something he's hiding."

On women: "This is a man who has called women pigs, slobs and dogs."

On Trump's mental instability: "A man who can be provoked by a tweet should not have his fingers anywhere near the nuclear codes."

And Trump helped her too. On his not paying any taxes, he said "That makes me smart." That will certainly fly well with the Republican mass, who hate paying taxes; but maybe it loses him some votes with moderates.

Then again, the US might have reached the point of Greece, where the biggest tax-cheat is the most respected. The anti-tax narrative has had a long time to run.

She's already won the Democrats' votes, and she doesn't have to bother trying to win the Republicans' votes: she just has to convince everyone with the possibility of sentient thought that they need to vote for her and quit with the "I like Trump because he's sticking it to Washington" nonsense.


Calculated Risk - a few words on new home sales. I could quote from his post, but I'd rather just reprint his chart: 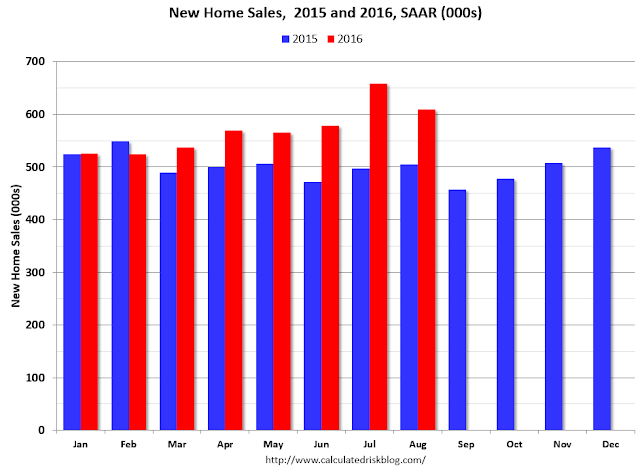 Housing this year is way better than it was last year, and the housing cycle is the US economic cycle. So quit being a pantywaist sissy and buy.