The crackhead trade is now gone with Kuroda's negative rates, the oil trade is gone with news of Saudi Arabia talking to Iran about production costs, and thus correlation will start uncorrelating. All we need now is for word-salad doomer newsletter writers to prepare another narrative for when $SPX sails thru 2000.

I'm sure whatever they dream up, they'll remind us they were right all along. Just don't look at last year's model portfolio return.

With that, here's some news:

Calculated Risk - Q4 GDP investment. And thus we see there can't be a recession coming because residential investment leads.

Tim Duy - FOMC recap. His prediction as to what data will bring a tightening in March, and which will make the Fed hold off. I guess the decision gets a little easier if oil stops dropping and the USD stops appreciating.

Andrew Batson - is China's slowdown really so hard to understand? His take:


It’s not like it’s a secret. From about 2003 to about 2010 China had the biggest construction boom of modern times and probably in all of human history. Then in 2011-12 the construction boom ended. That’s it. Really, that’s all you need to know.

And about that correlation business: 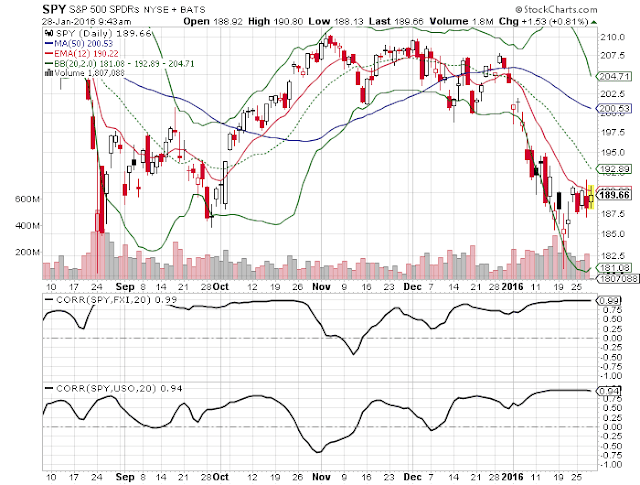 Correlations above 0.9 are generally bullshit, and indicate very crowded boats.

And now, the news

Tim Duy - the lack of dispersion in US weakness. One shitty little sector does not cause a US recession, especially when its entire business plan has been to parasitically drain the wealth away from the rest of the nation.

Econbrowser - can lower oil prices cause a recession? No. No they can't. Oh, so what about the correlation between oil prices and the US stock market then, you ask? Well:

Polemic's Pains - correlations work right up until they don't. And when they don't, you get to make a fuck of a lot of money from the senseless algos that take positions based on correlations without a thought as to market size or the ability to exit. So when's that going to happen? Well:

New Deal Demoncrat - the big trends of 2015 seem to be abating. At some point the bullshit will end and the doomer clowns with amateur newsletter hobbies will go back to blathering incompetent crap about the evils of fractional reserve banking.


Fine. I try and keep you informed and all you want is kitten videos.

Fine. Here's a bunch of baby kittens being fed their bottles:

Email ThisBlogThis!Share to TwitterShare to FacebookShare to Pinterest
Labels: kitties 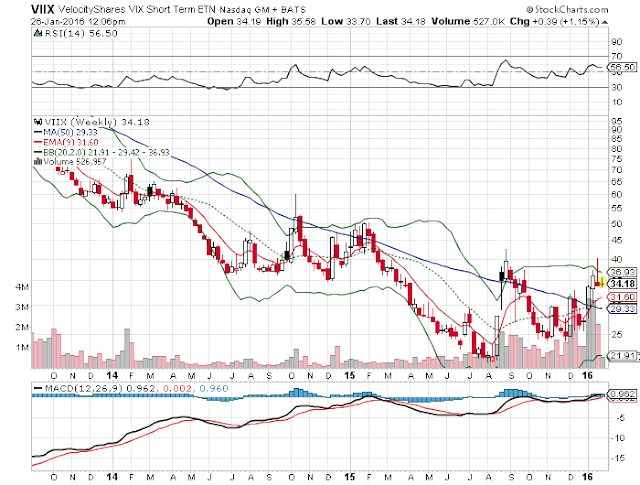 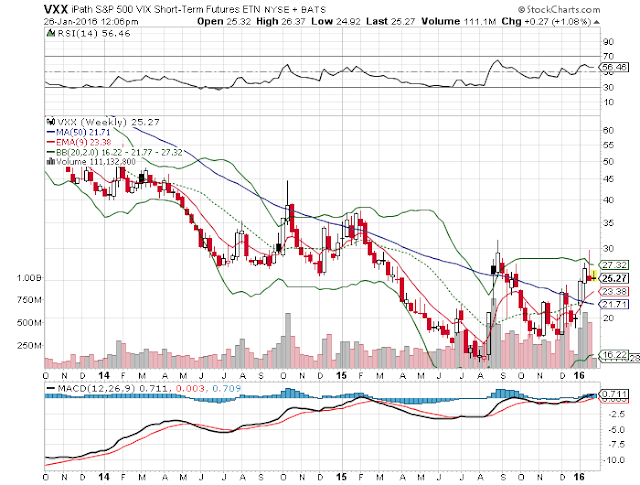 You tend to see a big volume spike right before $VIX starts going back down.


Nothing much to talk about economically in the past 24 hours. Oh, Shanghai crashed yet oil went up. We'll see today which of these stories the US market wants to follow: China dooooom, or oil dooooom. That's great, by the way: it'll give clarity to an unclear market.

So here's some noneconomic news:

Washington Post - Disney has become more sexist over the years. Modern Disney movies have less female dialogue and fewer female characters than they had even in the 50s.

Brodrick on DOOOM, which is some strange word I've never heard of before


Chronicles of Brodrick - DOOOOOM. There's 5 Os in DOOOOOM, buddy. As in:

Real GDP has grown at an average annual rate of 2.2% over the first three quarters of 2015. However, a number of recent indicators suggest weaker growth in the fourth quarter, including declines in construction and existing home sales, as well as weaker manufacturing data and a sharp decline in inventory buildup.

Despite the fourth quarter weakness, we expect real GDP to rebound in the first quarter of 2016, due to inventory payback and continued consumption strengths, and grow at an average annual rate of around 2¼% over the year as a whole.

The labor market continues to surprise on the upside. The December payroll report was very strong, as the U.S. economy added 292,000 jobs and figures for October and November were revised upwards sharply. The six-month moving average remains well above 200,000 jobs per month, portending continued labor market tightening.

The unemployment rate held steady in December at 5.0%, as increased labor force participation accompanied the growth in payroll employment. This suggests that some workers who were classified as out of the labor force have resumed searching for jobs, presumably due to improved expectations about chances for finding employment. As a result of the strong pace of job creation, we expect the unemployment rate to decline later this year to levels below the long-run natural rate of about 5%.

Inflation remains substantially below the Federal Open Market Committee’s stated 2% target. Oil prices have decreased dramatically, with West Texas Intermediate oil falling below $30 a barrel. Other commodity prices have fallen sharply as well. In addition, the broad trade-weighted value of the dollar has continued to rise, also putting downward pressure on import prices and inflation.

We project that headline inflation in 2016 will come in between 1% and 1¼% and rise gradually towards the 2% target as the effects of transitory shocks to energy prices and the exchange rate dissipate and as improving labor market conditions strengthen wage growth.

The FOMC “lifted off” after its December 2015 meeting, raising the federal funds rate target range from 0–25 to 25–50 basis points. This policy change was accompanied by only mild financial market volatility, with muted movements in market yields before and after the announcement date. This suggests that the Federal Reserve successfully prepared financial markets for the liftoff announcement through its prior statements and communications.

More recently, U.S. financial market volatility as measured by the VIX rate has turned up, largely because of concerns about financial volatility overseas, particularly in China. Chinese equity markets enjoyed a strong rally between the fall of 2014 and the summer of 2015, with values more than doubling. However, after a sharp selloff in the latter half of 2015, the Chinese government intervened in a variety of forms to stabilize equity prices. These efforts appeared to be temporarily successful, but prices resumed their downturn near the end of 2015 in response to additional weak news about Chinese economic fundamentals, particularly in its manufacturing sector. Technical factors, such as the on-off use of “circuit breakers” to limit sharp price changes, also appear to have exacerbated equity market volatility. Since the beginning of 2016, China’s stock market is down around 15%, more than erasing the overall gains in 2015.

The continued appreciation of the dollar against the renminbi and other currencies poses a downside risk to the U.S. inflation outlook.


Translation: quit piddling your frilly little pink panties. Unless you're piddling them over China of course.
at 11:14 AM No comments:

And for yet another day, B2Gold goes down when gold and GDX go up


And for yet another day, B2Gold goes down when gold and GDX go up.

or uh wait a sec

Email ThisBlogThis!Share to TwitterShare to FacebookShare to Pinterest
Labels: BTO, The Clive sucks™

Robert Shiller in the NY Times


His Shiller P/E is bullshit, but Shiller is actually a great prof from what I've found.

NY Times - Shiller on market narratives. He writes about the four pop narratives that are driving stock market commentary this year. I especially like his comment on China:


The prevalence of such stories encourages a gross exaggeration of the importance of the Chinese economy for our markets. Consider that United States exports in goods to China have recently accounted for only six-tenths of 1 percent of our gross domestic product. (United States imports in goods from China, though about four times bigger, are still relatively small as an overall proportion.) But once story-based thinking gets started, there is comparatively little public interest in such numbers.

Can lower oil prices cause a recession?

However, they can cause a sector-specific or sector-related recession, as it takes time for capital and labour to be redeployed to more worthwhile areas of production.

But the net effect on oil consumers (people and corporations) should be positive outside of sector-related industries.