Here's your gold chart and gloating, after the clickthrough so I can use the traffic to find out how much people care:

A bit of Friday news


Really dunno how I did on that macro test last night. Oh well, doesn't matter, I now have a week off from school.

We've got some catching up to do:


Calculated Risk - Bernanke's book is a hum-dinger. Damn, I want to buy this book:


"They blamed the crisis on the Fed and on Fannie (Mae) and Freddie (Mac), with little regard for the manifest failings of the private sector, other regulators, or, most especially, Congress itself. They condemned bailouts as giveaways of taxpayer money without considering the broader economic consequences of the collapse of systemically important firms. They saw inflation where it did not exist and, when the official data did not bear out their predictions, invoked conspiracy theories. They denied that monetary or fiscal policy could support job growth, while still working to direct federal spending to their own districts. They advocated discredited monetary systems, like the gold standards.

That Ben Bernanke ain't afraid to go into the corners!


Bloomberg - the big surprise about weak US profits is how strong they are. Remember just a few days ago when certain doomer blogs (like BI) ran stories about how the US was heading into a profit recession? Yeah, well here's another reason to never read those garbage blogs ever again:


“I simply don’t see U.S. corporate earnings peaking -- quite the contrary,” said Ross Yarrow, director of U.S. equities at Robert W. Baird & Co. in London. “The S&P 500 is too narrow to show the true health of corporate America. It’s too skewed. Lower oil prices feed into so many raw-material costs, and that is very, very good for the rest of U.S. corporates.”

Again, block Business Insider so you never get tempted to read their idiotic doomer bullshit ever again.


Krugginator - the China debt fizzle. Hey, remember when China was going to stop buying US debt, and that would be the start of a horrible debt spiral?:


Obviously, terrible things would happen if China stopped buying our debt, or worse yet, started to sell off its holdings. Interest rates would soar and the U.S economy would plunge, right? Indeed, that great monetary expert Admiral Mullen was widely quoted as declaring that debt was our biggest security threat. Anyone who suggested that we didn’t actually need to worry about a China selloff was considered weird and irresponsible.

Well, don’t tell anyone, but the much-feared event is happening now. As China tries to prop up the yuan in the face of capital flight, it’s selling lots of U.S. debt; so are other emerging markets. And the effect on U.S. interest rates so far has been … nothing.

Who could have predicted such a thing? Well, me.


WSJ Moneybeat - Morgan Stanley turns bullish on WHAT NOW? Apparently, they're calling the bottom on miners. Look out y'all, Whitey's about to jump his fat honky ass back into the kiddie pool! Buy before he does!


Yahoo Finacne - Bill Gross to sue Pimco for hundreds of millions. God, he truly is a fucking lunatic:


Bill Gross sued Pacific Investment Management Co. and parent Allianz SE for “hundreds of millions of dollars,” claiming he was wrongfully pushed out as the bond giant’s chief investment officer by a “cabal” of executives seeking a bigger slice of the bonus pool.

“Driven by a lust for power, greed, and a desire to improve their own financial position and reputation at the expense of investors and decency, a cabal of Pimco managing directors plotted to drive founder Bill Gross out of Pimco in order to take, without compensation, Gross’s percentage ownership in the profitability of Pimco,” according to a complaint filed Thursday in California state court. The complaint alleges that Pimco executives’ “improper, dishonest, and unethical behavior must now be exposed.”

No, Bill. You were fired for being a fucking psychopath. People were literally scared of you. You were violating Pimco's workplace harassment and violence policy, if they had one. Grow up.


John Quiggin - Bitcoins are a waste of energy. Basically, the entire value of a bitcoin is tied up in the cost of the electricity that was used to create it:


In essence, the creation of a new Bitcoin requires the performance of a complex calculation that has no value except to show that it has been done. The crucial feature, as is common in cryptography, is that the calculation in question is very difficult to perform, but, once done, is easy to verify.

In the early days of Bitcoin, the computations in question could be performed on ordinary personal computers. Nowadays, however, 'miners' use special purpose machines optimised for the particular algorithms used by Bitcoin. With these machines, the primary cost of the system is the electricity used to run it. That means, of course, that the only way to be profitable as a miner is to have access to the cheapest possible sources of electricity.

And thus bitcoins cause pollution.


So I have my macro test this afternoon, so I'm studying instead of feeding you news stories.

My stats prof put up the answers to our stats test today, and I just now fired off an email to him correcting his mistake on one question.

He said the statement should be read as "colour movies, or not Spielberg dramas".

I knew this cos I took Boolean in college. Problem here in university is that the only Boolean they taught was DeMorgan's Laws, and that's not even the start of Boolean logic.

Hopefully he gives me bonus marks for correcting him. :-)

Email ThisBlogThis!Share to TwitterShare to FacebookShare to Pinterest
Labels: economics


It's midterms this week.

I had a stats midterm last Friday and did well, though I know now that I got one question wrong. The sample test only took me 15 minutes but then the real test was a lot longer: I dunno if it's a problem with sleep deprivation or a problem with writing a test in a Quonset hut.

Yesterday was intermediate micro. It was yet another case of the real test being harder than the sample test: I got out after 40 minutes and I was only the third or fourth person to leave. Poor kids are getting killed on these tests.

Thursday is intermediate macro, and just by looking at the sample tests I have a crapton of studying still to do.

Oh well. The gold miners are finally making an upmove, and Whitey seems to have finished puking US equities, so everything's back on set-and-forget while I do my studying.

Next week school is out, but I'll be at work. No problem for you, I still post when at work.


New Deal Demoncrat - weekly indicators. Industrial recession but with US consumer expansion. The yoy housing numbers are stunning and M1 and M2 are still fantastic: that means consumer capital and velocity of money are accelerating, and those are two huge portions of the US economy.

Calculated Risk - prime working-age population growing again. And that provides a 0.5% boost to US growth.

Streetwise Professor - people get a grip! Glencore is not the next Lehman, and the fear that it is could well be the bottom-tick of the whole mining market right there.

Krugman - on Blanchard. Personally, I agree that Blanchard should be criticized for allowing the "fiscal multiplier = 0.5" bullshit out into the wild: essentially he sent the entire European economy back into recession by encouraging neocon philosophy. But Kruggers thinks he's great cos he admitted his error. Oh well. Blanchard is still a true macroeconomist, which means university professors have even less justification for using a textbook from that clown Mankiw when Blanchard's (and Bernanke's and Krugman's) are available.

Bron Suchecki - sucking silver through a straw. Only a goldbug (or silverbug) is dumb enough to confuse stocks and flows. No, you won't break the Comex by buying silver rounds, dumbass, because the silver rounds manufacturing sector is too small a flow to affect bullion stocks.

Worthwhile Canadian Initiative - could monopoly power explain declining interest rates? This is too wonkish even for me. And probably wrong, since it's based on the silly oversimplified models of economics. I would think that the whole institutional economics field (start with Galbraith, kid) already addressed this decades ago. You just never read them because your profs wouldn't let you.

You think the China fear is over? 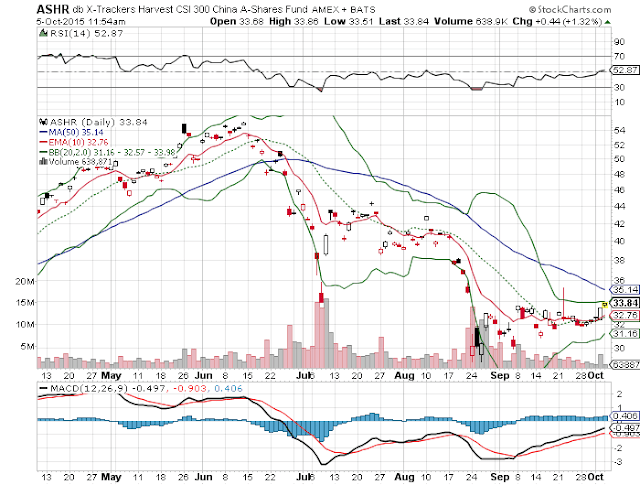 After a couple weeks of failing to collapse, ASHR is starting to look healthy again. 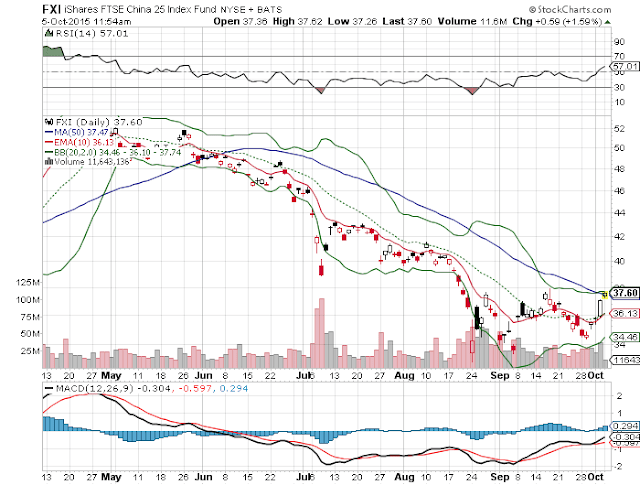 And same for FXI. Challenging the SMA(50), even.

I dunno, maybe Wall Street Whitey has realized Shanghai only dropped back to where it was in the winter, and it doesn't feel like dropping anymore, and it's actually well-valued if you assume 6-4% growth for the next ten years?

Or maybe he realizes that there's a bifurcation in the EMs, and while dumps like Brazil and Turkey are collapsing under their own sociological ineptitude and their reliance on commodities whose production is easily expandible, China and India have still been growing quite well, as evidenced by the fact that both the yuan and rupee have remained strong. And thus, for example, Chinese and Indian USD-denominated corporate debt isn't even remotely threatening, since USD has depreciated against these local currencies.

I wouldn't exactly be buying China and India right now, but I'd maybe be looking at some sort of thing that's in demand in these countries, whose future outlook is dependent on continued Indian and Chinese wealth formation.

Y'know, like maybe some sort of yellow metal that they together buy 2000 tons of every year.


Darn, I forgot to clear out my inbox this weekend.


[...]businesses with more market power are able to charge higher markups on their goods and services, meaning their pricing is higher than the cost of producing an additional goods or services compared to pricing in a perfectly competitive market. So in this situation where markups are high, goods and services are being produced less efficiently, with the increased profits going to the owners of capital.

But if it's all down to Cobb-Douglas exponents changing due to neocon anti-labour strategies, then what to make of the ten trillion dollars hidden in offshore bank accounts not being reinvested in the world economy?

FT Alphaville - assessing Abenomics re corporate capex. The real point is to shake the money out of corporate Japan's pockets, and it ain't happened yet.

FT Alphaville - negative rates and the death of banking. Izzy Kamizzy on rent extraction killing the hand that feeds it. I still say the entire glut-of-savings problem is the result of right-wing ideology. When will anyone listen to me?