And I'm awesome too


Oh and I found out I got an A+ in Intro Macro by the way.

Email ThisBlogThis!Share to TwitterShare to FacebookShare to Pinterest
Labels: economics

Monthly data for May included new and existing home sales, both up strongly, personal income up, personal spending up strongly, with saving down. University of Michigan consumer sentiment was up, with present conditions reaching a post-recession high. Sentiment about both the present and future is in line with the best readings of the 2001-07 expansion. The only negative report was durable goods, showing the shallow industrial recession goes on.


I'd add that tax withholding continues to be fantastic, while rail loads are still generally a disaster except for intermodal.

So yeah, it's an industrial-sector recession with the rest of the economy (especially we livestock) doing well.


Again with the summer music videos:

Let's make all Republicans' heads assplode with one single chart


BI (bless 'em, the click-whores) just printed a chart that we can use to piss off all Republicans, neocon bloggers, hard-money whackaloons and goldbug clowns.

You wanna see it? I'll show it to you.

OK? Are you ready?

Century Mining, the clusterfuck that keeps on cluster-fucking


Financial Post - Integra offers $1 million cash prize to anyone who can figure out how to fix a useless asset that they grossly overpaid for. Yes, it's Century's old Sigma mine in Val-d'Or, that Integra bought from the receivers when Century went under, after the Russians got involved. Quote:

When Integra Gold Corp. bought the Sigma-Lamaque mine in Quebec last year, it came with an unexpected treasure trove: 70 years of prospecting data.

Now the Canadian miner plans to start an Internet-based gold rush with the six terabytes of information.

Instead of analyzing the drill-sample reports and geological surveys it found among papers and folders at Sigma-Lamaque, Integra will upload the studies to the Web and let anyone sift through them. Whoever finds the next multimillion-ounce deposit wins a $1 million prize.

Translation: "yeah, we don't really know what to do with this worthless mine, but we know there's a bunch of unemployed geologists out there so we'll let them futz around with our data, and $1M is nothing compared to our yearly care & maintenance bill."

Email ThisBlogThis!Share to TwitterShare to FacebookShare to Pinterest
Labels: CMM, Don't do business with Russians


The rise in oil prices from near $30 per barrel in 2000 to around $110 per barrel in mid-2014 was a dramatic reallocation of global income to oil producers. So what did oil producers do with this bounty? Trade data show that they spent about half of the increase in total export revenues on imports and the other half to buy foreign assets. The drop in oil prices will unwind this process. Oil-importing countries will gain from lower oil bills, but they will also see a decline in their exports to oil-producing countries and in purchases of their assets by investors in these countries. Indeed, one can make the case that the drop in oil prices, by itself, is putting upward pressure on interest rates as income shifts away from countries that have had a relatively high propensity to save.

Basically, S = I + NCO. A country that earns a lot of money from oil exports ends up with a lot of S (savings), which has to (apparently it's an accounting identity) go into I (domestic investment) and NCO (net capital outflow, which is the purchase of foreign assets, which can include USTs).

What's neat to me is I think I just stumbled across a good reason to dump my old Jim Rogers theory of investment cycles in favour of this one:

1) A commodity bull market will increase NCO of high saver countries, which thus suppresses the world interest rate, and thus provides a boost to EM economies.

Looking at that, I guess it has to be much more complex than what I just wrote. But I guess I'll be learning more about that in 3rd year.

Remember, at that time, it was showing a realtime GDP estimate of ~0.6%?

Remember how much the gutter press blathered about OMG the US is screwed and that horrible Yellen was going to raise rates and destroy the economy?

My god, we should check and see how much worse the GDPNow is today!:

So things are better now.

Email ThisBlogThis!Share to TwitterShare to FacebookShare to Pinterest
Labels: morans

Some perspective on the transports stinking 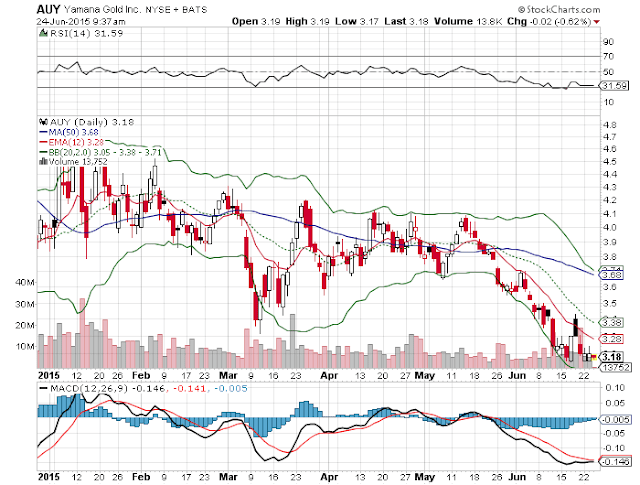 Has anyone pointed out that you're a $3 stock?


BBRY reported some sort of earnings or other today, and the stock is down on heavy volume: 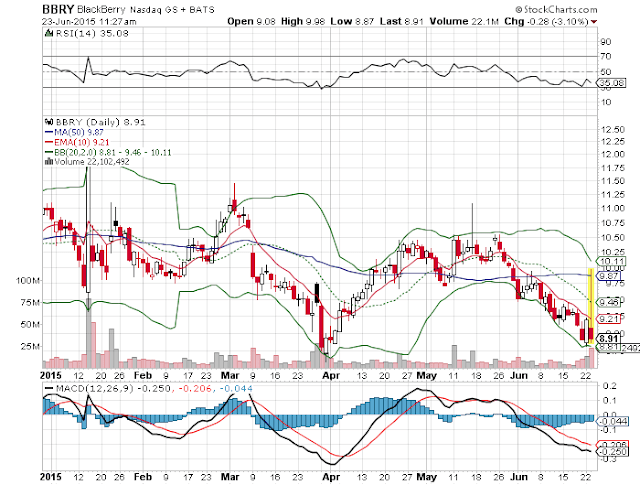 The last time the stock was down on heavy volume was at the end of March there in that chart, after which it drifted back up.

So, do you want to buy BBRY? 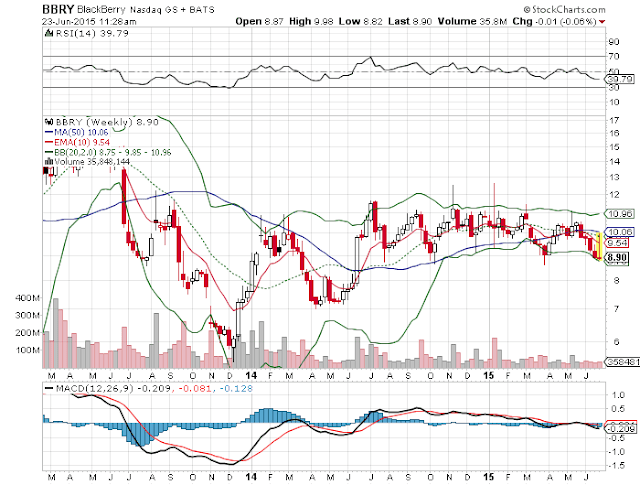 Meaning maybe you get clobbered if it breaks down from here.


IKN - ha ha Argentina is teh aewsomez you Americans suck. Wherein he publishes this chart to show us how awesome it is to invest in Argentina:

Of course the only thing you should really look at is the USD-terms performance of Argentina, to make sure you're comparing apples. So you can ignore the OHLC line and stick with the blue line.

Since this spring, The US has outperformed ARGT by 7%. While going nowhere, even.

Since mid-2013, the US is up 25% while Argentina has done nothing zip nada bupkas.

And zooming out to the past four years shows what an utter disaster Argentinian equities have been: after the 2011-2012 crash they still have not managed to recover in any meaningful way, while over the same period the S&P is up SIXTY SEVEN PERCENT. Uh, plus dividends. So make that about... 75%?

Thus, the importance of cherrypicking your chart intervals.

PS and so the Falklands will remain forever British!

My only regret is I can't force him to press play.

Email ThisBlogThis!Share to TwitterShare to FacebookShare to Pinterest
Labels: sharts, What Otto's on about today

That Intro Macro lesson on the market for loanable funds says that the market clearing interest rate is determined by the balance of supply and demand. So if you're shorting the bond market, or even staying out of the bond market, that must mean you think investment spending is going to really take off, driving up funds demand and thus the interest rate.

Either that or you're a coke-headed fruitcake who doesn't understand that bond investing is all about preserving capital and clipping coupon, in which case you should get the hell out of the bond market anyway. Buy gold and MREs, dumbass. 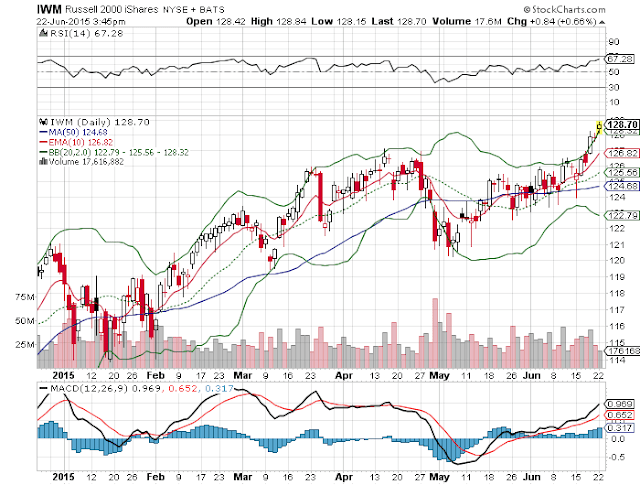 Oh look, the Russell broke out last Thursday. Did your favourite doomer make sure you were told?

Email ThisBlogThis!Share to TwitterShare to FacebookShare to Pinterest
Labels: To da moon alice

Let's check in on that deficient monsoon and impending drought, shall we?


Let's check in on that deficient monsoon and impending drought in India that will destroy their economy and thus reduce gold demand, eh?

Skymet - 2015 monsoon update. Doesn't look so bad after all. Don't believe Skymet? Then believe this:

Rainfall in June is almost certain to be significantly more than normal, going by predictions of weather scientists from Australia to the US, giving a flying start to the four-month season that brings 75 per cent of the rainfall the country receives and fills up water reservoirs for irrigation and hydropower generation for a year.

The monsoon has already delivered 16 per cent excess rainfall since the start of the season on June 1, and is expected to remain strong at least until the end of the month. This should cheer the markets and calm fears of inflation, which had emerged as the monsoon made a sloppy start.

The floundering monsoon has been catalysed by an equatorial system of clouds and disturbances that traverses the globe. The system, called Madden Julian Oscillation (MJO), has strengthened rain-bearing clouds along its path and given the country 33 per cent surplus rain on Saturday and a drenching 88 per cent surplus on Sunday. "MJO is definitely influencing the southwest monsoon," said Laxman Singh Rathore, director-general of meteorology, India Meteorological Department.


So much for the impending drought that you guys predicted just a couple months ago, Laxman. Continued:

In its current phase, the monsoon is making good progress. "Conditions are favourable for further advance of southwest monsoon into remaining parts of north Arabian sea, Gujarat state, Chhattisgarh, Jharkhand, entire Bihar, Uttarakhand, Himachal Pradesh, Jammu & Kashmir, most parts of Madhya Pradesh and some parts of Uttar Pradesh, Punjab, Haryana, Chandigarh and Delhi and Rajasthan during the next 3-4 days," the weather office says.


So it turns out they're getting a pretty darn good rainfall so far this season.

So buy gold before the Indians do! They're finally popping above the short EMA and Bollinger mean. That might mean at least a bottoming process, if not a move back up through the SMA(50). 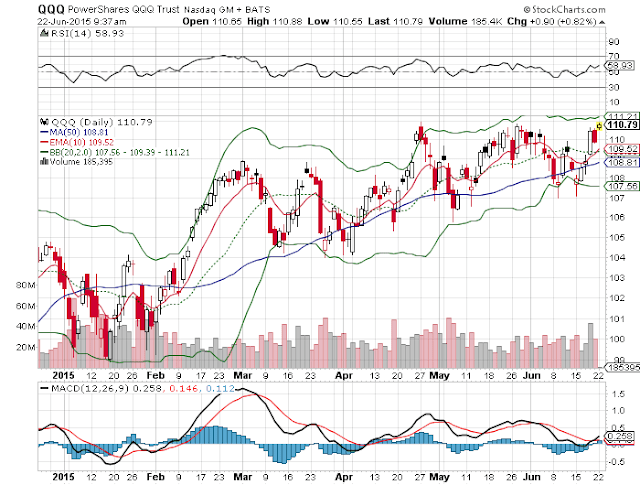 And QQQ breaks out to a new high at the same time.

Ready for a summer surge in the US, anyone?