To help drive the winter away, here's Horace Andy


Fuck the snow in the ass, here's Horace Andy:


This guy could write a couple sci-fi novels a week with the weird ideas he has. But instead he doodles comics and makes dick jokes.


YouTube is quickly achieving critical mass, whereupon which it will become a black hole containing all the videos that have ever been made.

For those interested in the 1990s indie rock scene


For those interested in the 1990s indie rock scene, I've come across a few fun articles:

Pitchfork - the practical lessons of Sonic Youth. Even though it's Precious Pitchfork, the author still asks a very important question: why shouldn't they have "sold out" to Geffen in 1990? After all, the cool indie labels were run by a bunch of crooks and morons who couldn't even pay their bands the royalties they earned.

Magnet - Homestead, the label that plundered indie rock. Here's Ken Katkin making the most of a bad situation:


“Because I already knew the operation was something of a criminal enterprise and was not going to really pay any artists no matter what they sold, that influenced my A&R decisions,” says Katkin. “I started to see my mission as trying to put out records that had a lot of artistic merit and weren’t likely to be huge sellers. I didn’t want to be in a situation where a band sold 50,000 copies and then got ripped off.”

Sales figures of Homestead releases around this time more typically ranged from a few hundred to a few thousand. According to Katkin, Tenenbaum cut no royalty checks to artists during his two years at the label and often neglected to provide bands with biannual accounting statements. MAGNET spoke to more than a dozen former Homestead artists for this article. Some are still seeking financial compensation; some make no claims against Homestead or Tenenbaum. Others, such as My Dad Is Dead’s Mark Edwards, say they naively signed a contract and will probably never know for sure if they’re owed money.

Email ThisBlogThis!Share to TwitterShare to FacebookShare to Pinterest
Labels: stuff

New Deal Demoncrat - US economic indicators still aren't collapsing. But you go on and keep reading those ignorant fucking clowns who are calling a cyclical top. I mean, the data doesn't matter, does it?

Calculated Risk - new unemployment claims at lowest since 2007. But you go on and keep reading those ignorant fucking clowns who are calling a cyclical top. I mean, their model port performance over the past two years proves they've read the market right all along, no?

BI - Obama says "the Affordable Care Act debate is over". First he does this:


He criticized Republicans who he said "can’t bring themselves to admit that the Affordable Care Act is working," arguing that the GOP push to repeal Obamacare had come at the expense of productive conversations about creating jobs, improving the economy, and raising the minimum wage.

"The point is, the repeal debate is and should be over. The Affordable Care Act is working," Obama said in the White House briefing room.

Then he does this:

Not really. But if Biden was Prez you know he would.

IKN vs Mickeyman on the gold poll

IKN - excellent news for the price of gold next week! Where he notes:


the news just out from Kitco that its band of self-appointed experts on the gold price has turned collectively bearish on the price of gold next week is good news indeed for those of us looking for higher gold prices.

But Mickeyman had a better take on the Kitco gold price poll:

World Complex - you too can be a gold expert, where he notes that the Kitco gold price poll actually correlates pretty darn well (looks like r>.5 to me) with the previous week's price action in gold: 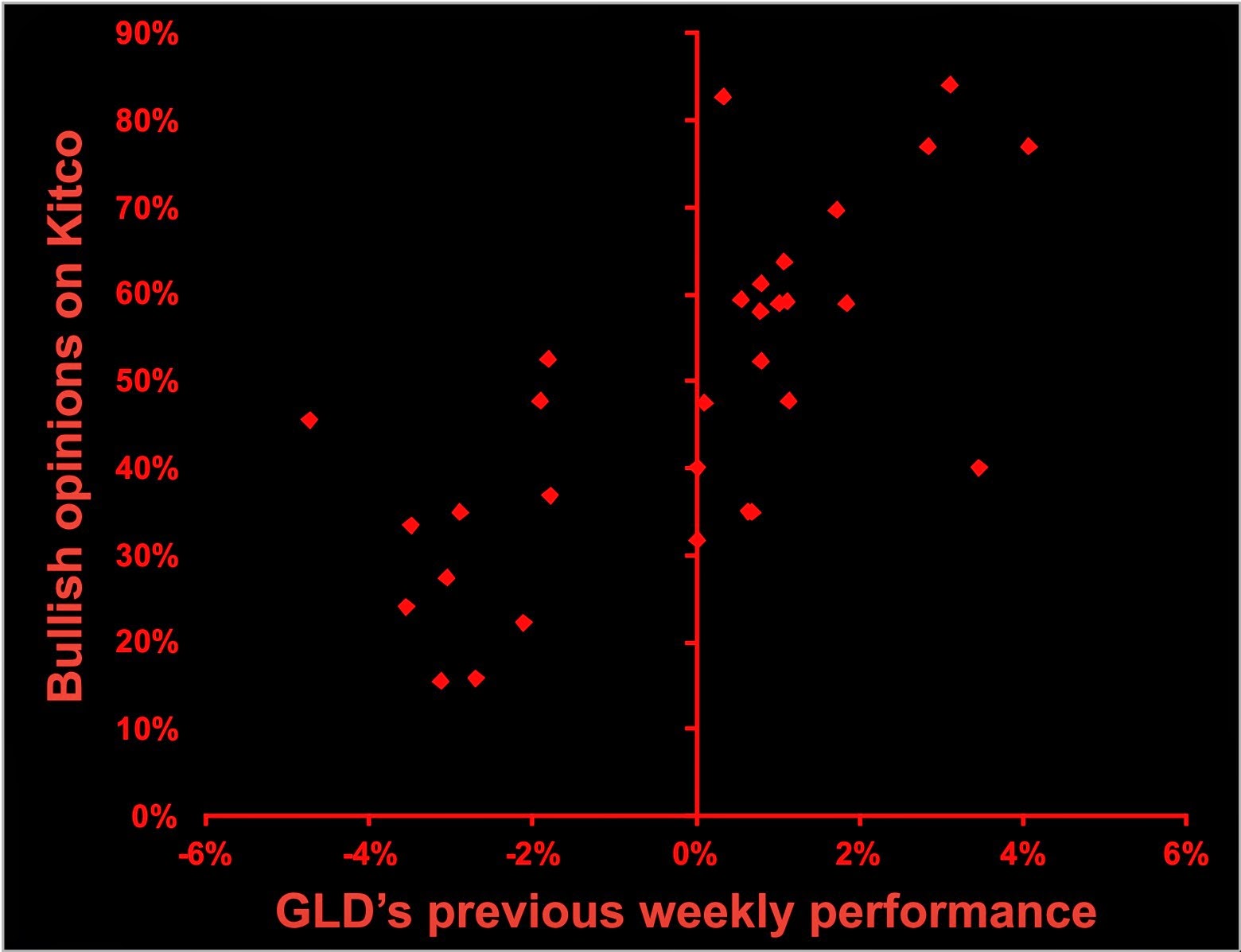 So what Kitco's poll is actually saying is that the price of gold went down this week.

Email ThisBlogThis!Share to TwitterShare to FacebookShare to Pinterest
Labels: gold sucks™, What Otto's on about today

I dunno if this means they've already run through their other 4.5 million articles, or Wikipedia is now taking promotion money, or maybe just that Kylie fans are insufferable.

Email ThisBlogThis!Share to TwitterShare to FacebookShare to Pinterest
Labels: what Otto's not on about today


Some stuff this morning:


BI - Goldman Q1 earnings slay. Also Morgan Stanley looked good. So can we stop puking bank stocks now that I've loaded up on ZUB? The world's not ending after all, lemmings.


FT Alphaville - China gold collateral financing shock. Several things to learn from this article: first, Goldman Sachs thinks about 1000t of gold is tied up in commodity-backed financing in China, and presents some data to back their thesis. Second, Izzy Kamizzy must be reading my blog:


Bringing it back to gold, this is why we’ve always been sceptical of those using rampant Chinese consumption of gold as an indication of an imminent rebound in the gold price.

Who's "we", Izzy? You and the blog you nicked the idea from? And thus, third, now I know the identity of that person with the Portobello Road IP address who's been showing up in my blog stats.

China's economic indicators remain strong, Ferreira said after data on Wednesday showed China's economy grew at its slowest pace in 18 months at the start of 2014.

It's a case of scale of the Chinese economy relative to the iron market, not so much the speed of growth. Then again, Chinese leadership recognizes they have far too much output, and want to kill a bunch off; the increasing output is only happening because the steel industry isn't obeying the government's commands. Yet.


Two lonely newsbits pass each other like ships in the night:

Ritholtz - corporate capex is a huge opportunity. Hey, Barry? Maybe the market already knows this and it's been priced in?

Further to the previous


Further to the previous, I's gots me a question I wanna axe all you engineering professionals reading my blerg:

How do you "demonstrate that a proposed methodology is well suited for the work"?

Seriously, is this just a string of words that somebody put into a proposal one day, that subsequently spread like a virus throughout the entire engineering world?

Email ThisBlogThis!Share to TwitterShare to FacebookShare to Pinterest
Labels: what is this I don't even

THE GREATEST SCOURGE OF OUR AGE: here's what you need to know


I'm busy at work, but I just wanted to mention that I think one of the great scourges of our age is skimping on the word "the" in technical documents.

If you hate the word "the" so much, go back to Russia you goddamn commie.

Email ThisBlogThis!Share to TwitterShare to FacebookShare to Pinterest
Labels: scum and villainy


For the 3600th post of this blog's existence, I'll just point out that this morning gold crashed to $1290.

Calculated Risk - retail sales up 1.1% for March. Hey, know what that means? It means you should puke the S&P 500 because we're at a cyclical top and the market's about to crash! Economic statistics don't matter! Because potato!


When traders had the Fed at their backs, money flowed into speculative issues. From the end of last year to late February alone, TSLA practically doubled. It was up roughly 5x in the past year before moving down about 20% from that February peak. The biotechnology ETF IBB rose over 50% in the past year, also hitting a peak in late February--and since is down over 20%. But utility shares (XLU) and consumer staples stocks (XLP)? They're not far off their highs at all.

Investors are acting as if the Fed no longer has their backs. They are sticking with stability and selling momentum. They started the year with the perception of tailwinds and now are behaving as if they're facing headwinds. That makes them take risk off the table.

Alternatively, guy, maybe the no-profit speculative biotech and Nasdaq stocks just plain ran out of buyers; now that people are beginning to decide to sell, those stocks going to go back down.

But more importantly, Brett Steenbarger has returned to blogging, and you need to RSS him.

Reuters - new poll says BJP headed for slim majority. It won't work out that way; votes are bought and paid for at the regional level in India, and the pollsters don't seem to be able to catch that. But if people actually gave a shit about Indian gold demand, you'd think this would be bullish for gold in the near term, no?


Here's some news to waste your time with:


Ritholtz - all the bearish narratives are bullshit, buy the S&P and quit whining. Short-term market moves are random-ish because human buy and sell points are lumpy. Human buy and sell points are lumpy probably because our setpoints for pain and pleasure (thus sell and buy points) don't lie on a continuum, but are clustered at certain levels. Add to that positive feedback in herd behaviour and you've got your explanation.


Reformed Borker (Bork Bork Bork!) - on diversification and stuff. Why you need either brass balls or rabies to be 100% in US equities. Then again, his buddy Barry used to say it's no problem avoiding drawdowns in US equity positions - just use the 200DMA as a stop.


FT Alphaville - leaving Las Bambas, hahaha, you see what we did there? Glenstrata now has a big pile of money to play with. I also find it interesting that China wanted to buy a big copper mine, given the whole "Chinese copper demand is collapsing OMG" narrative.


Chronicles of Brodrick - three important gold charts. Charts 1 and 3 simply tell you what's happened already and in no way imply any sort of trend, so you can ignore them. But I found this chart interesting: 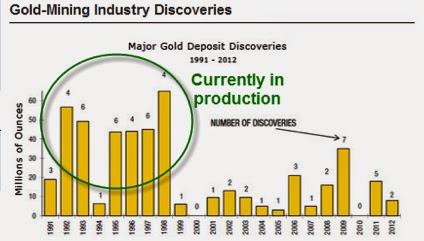 Pretty freaky that we have actually seen a bear market in discoveries over the past 15 years, no?


Ritholtz - famous witty insults of the past. No "feck you, ya feckin' fecker"s here. One of my favourites is


"I have never killed a man, but I have read many obituaries with great pleasure.”
- Clarence Darrow

Time to be bullish gold again? Some charts 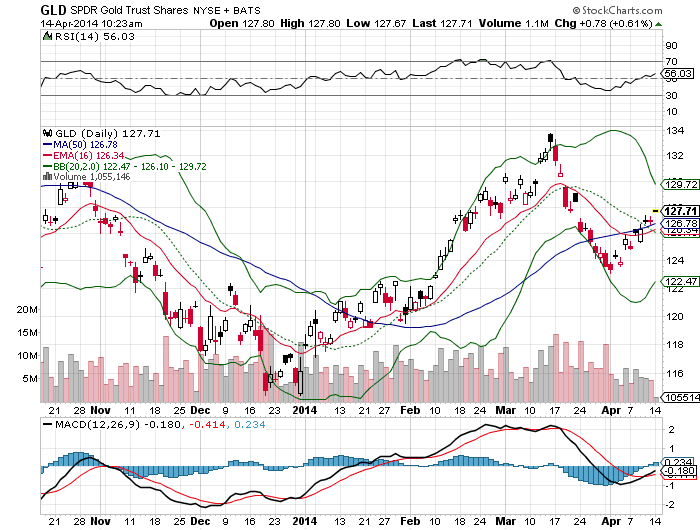 My basic criterion for being bullish anything is, is the thing in an uptrend? Gold here is above its EMA(16) and MACD is up, so that's bullish, no? Then again the volume kinda stinks.


From xkcd, here is a very simple explanation of the Heartbleed (not a virus but a) sploit:

I doubt, btw, that anyone wants your stupid gmail account.

Except for the NSA of course.

Email ThisBlogThis!Share to TwitterShare to FacebookShare to Pinterest
Labels: xkcd

Wow, the market has been destroyed, eh?


Apparently, technical damage has been done to the market, and thus we are at a cyclical top, according to some blogger.

Yay! Another excuse to look at charts! 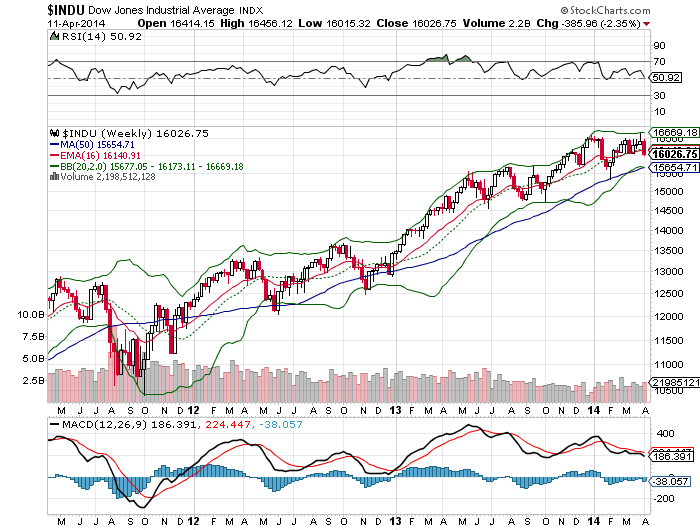 Sixpence None the Richer's "Kiss Me", in Klingon.


So you might remember this cute little 90s pop ditty:

Apparently they were a Christian band, but this song sounds suspiciously to me like it's about two girls making out, and the other hit of theirs was a cover of The La's "There She Goes" which is apparently about heroin.

Someone did a cover of this song, in Klingon:

Your argument is therefore invalid.