Here's Brent Cook and Mickey Fulp drinking beer and talking about things at PDAC 2019, because Mark Turner doesn't give a shit about you and I do:

Stephen Harper back at it


BNN Bloomberg - Harper complains about Canada's competitiveness. Which is funny, because the more you concentrate on oil and gas, the more your country becomes uncompetitive in every other industry. But Harper doesn't know that because his entire education was a worthless MA in economics from a third-rate university.

Actually, he almost destroyed our economy by pursuing US-style mortgage finance reforms in 2006, and only figured out what a stupid idea they were when everyone began to realize that reforms just like his, when pursued in the US, were what caused the US crash... so that also indicates he has no economic insight whatsoever.

And he's probably just writing this to provide a bit of support for Andrew Scheer. Which is sad because the only job Andrew Scheer ever had, outside of shilling for the Conservative party, was being a waiter for a bit after university. So Harper's supporting a twit whose background is even more useless than his own.

But Harper's weak support isn't worth much anyway, because his supposed recent book "Right Here Right Now", a supposed explanation of the rise of populism, probably blaming everything on liberals instead of on his right-wing fanatic buddies from the Reform Party of course, is being given away for free on conservative websites because nobody wants to buy it. Because Harper himself was always an intellectual lightweight at best. Now the world ignores the worthless sweatervested fuck.

It's really pretty pathetic that most of the conservative leaders you see now have never accomplished a single fucking thing in their lives beyond happening to win an election once or twice.

I mean, why can't conservatives find someone who has accomplished anything whatsoever, and get them to lead their party? I mean, they could have had Belinda Stronach… at least she inherited some money and worked at her dad's car parts manufacturing business.

Oh, and regarding Brexit


Brexit right now is being presented as a fuck-up. May can't get enough votes for a deal, and the parliament doesn't want to vote for a no-deal, and the EZ would have rocks in its head if it gave the UK an extension beyond the coming election, because now some twits like Rees-Mogg have outright asserted that they'll do nothing but sabotage the EU if they get the chance.

But there is an alternative.

All she has to say is "if Parliament can't agree on a deal that preserves the Irish peace, it is the government's responsibility to revoke Article 50 until such time as Parliament grows up."

It would put her back above the level of the clowns like Rees-Mogg and Johnson, so she would come out the winner; and the uncertainty would be over. The pro-Brexit voters would still bitch, but she can tell them to complain to the MPs that stopped her from succeeding.

Maybe she can even direct MI6 to investigate Russian pro-Brexit propaganda, then leak all the facts to the public, thus discrediting Brexit and UK nationalism once and for all.

Theresa, if you're out there reading this, that's your way out.

Well, what a difference a couple days makes 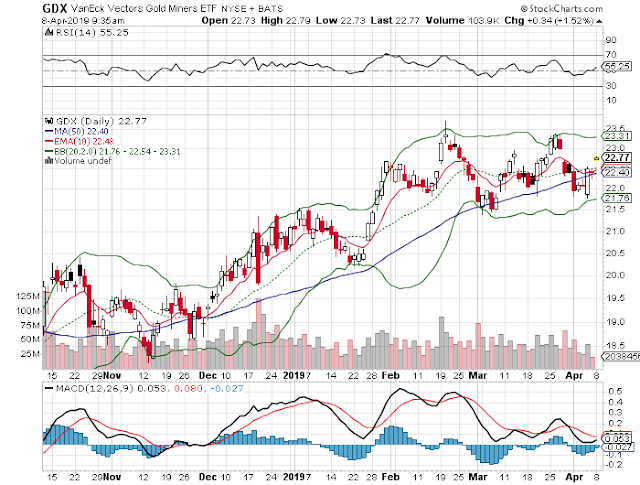 Gold had turned down, and was busting through its lower Bollinger.

But then it staged a strong reversal on Thursday, and as of today has just bust above $1300.

I don't trust the narratives: yippie shit, Germany is in recession and the UK is in chaos and Trump is asking for QE4. I don't care, that's all nonsense to me. The chart's what matters.

Problem is, if that there MACD triggers up, then it's triggered up from a near zero condition with RSI in the 50s, and that means a sustainable price rise is quite plausible. And down volume has been unconvincing, with a one day exception.

This morning's gold spike above $1300 seems to be petering out, though, so maybe it was just a probe of the $1300 level by some trader somewhere who's going to end up faking everyone out.

Email ThisBlogThis!Share to TwitterShare to FacebookShare to Pinterest
Labels: gold might no longer suck but how many times have I said that before

Friday videos: you can tell I'm getting bored of the blog


Going off to graduate school. Will probably wipe this blog eventually, in favour of one that won't get me burned alive by armies of bourgeois brats pretending to be leftist. 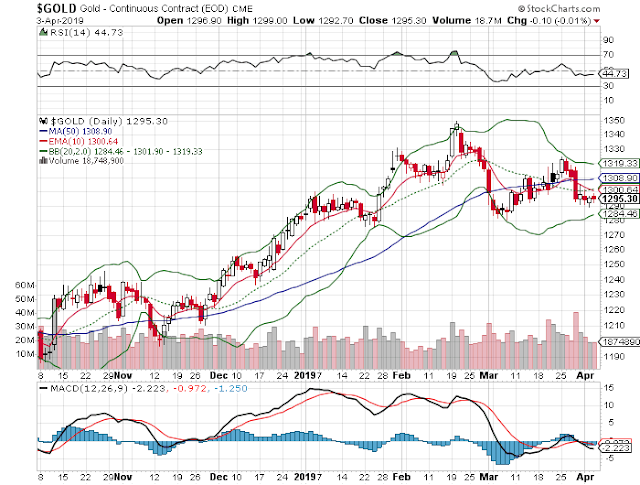 Gold crashing to $1282 this morning, through the -2SD line, with a MACD already where it is, with price already having spent a week hovering below the SMA(50), and with RSI already below 50, means at a bare minimum we're dropping even further to something like the fall 2018 cluster at $1230.

In other words, this chart needs to start looking horrible before there's any chance of it starting to look better.

And it wasn't even an April Fool

No, seriously, someone did a study and published it in a peer-reviewed journal.

And get a fucking proper hairdo, Skrillex. You look like a lesbian from 2004.
at 4:43 PM No comments:

Grandfather: who is playing?

Email ThisBlogThis!Share to TwitterShare to FacebookShare to Pinterest
Labels: funnies

Friday videos: England for the English


Here's one for Otto at IKN, Dominic Frisby, and all the other UK nationalists out there:

Looks like you're going to get another waterfall collapse. You might, however, get the opportunity to go long at $1200. But for the time being, gold is probably dead.

Email ThisBlogThis!Share to TwitterShare to FacebookShare to Pinterest
Labels: gold might no longer suck but how many times have I said that before

When Swedish Chef, Animal and Beaker sing anything, you know it's going to be fun: